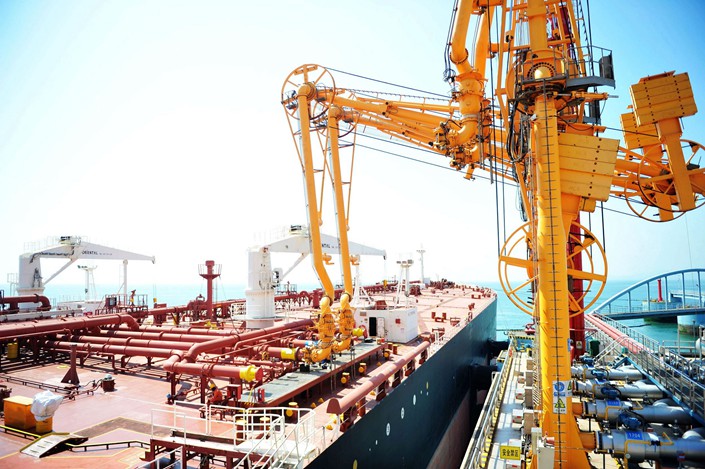 China’s oil imports reached record levels in November boosted by increasing demand from the country’s burgeoning petrochemicals sector, while gas imports also hit new highs thanks to the push from coal to gas-powered heating this winter.

Oil imports rose 8.5% year-on-year in November to hit 10.43 million barrels per day (bpd), according to data (link in Chinese) from the General Administration of Customs, marking the first time China has broken the 10 million bpd mark.

The country’s burgeoning petrochemicals sector appears to be driving the growth, with Shandong-based private refiner Hengli Petrochemical Co. Ltd. undergoing test runs at its major refinery in Dalian in China’s northeast, with Zhejiang Energy Group also gearing up for tests before the end of the year.

China’s smaller, private oil refiners — known diminutively as “teapots” — face an uncertain future as the government looks to clamp down on less-efficient, more polluting refineries. Meanwhile the country’s petrochemicals industry is set to expand and take advantage of growing demand for the production of higher end materials, experts told Caixin in October.

Natural gas imports also broke records in November, rising 25.6% year-on-year to 9.15 million tons. This was on the back of government efforts to wean the country off highly-polluting coal power, particularly for heating the north of the country during the winter months. Gas imports for the first 11 months of the year now stand at 81 million tons, cementing China as the world’s biggest gas importer after it surpassed Japan in June.

The government appears to have taken seriously the need to secure adequate gas for the season and avoid the embarrassment of last winter, when shortages left parts of the country shivering and restrictions on coal consumption had to be eased to make up for the shortfall.

Coal cargoes that arrived in November will not make it through customs until late in December or next year, Reuters reported, owing to increased restrictions implemented to support domestic producers, with major producers seeing profit growth of 16.6% in the first eight months of this year, according to consultancy China Policy.

China’s overall imports in November rose at a moderate pace of 3% year-on-year to $182.7 billion, the slowest rate since October 2016, when purchases of foreign goods fell by more than 1%.