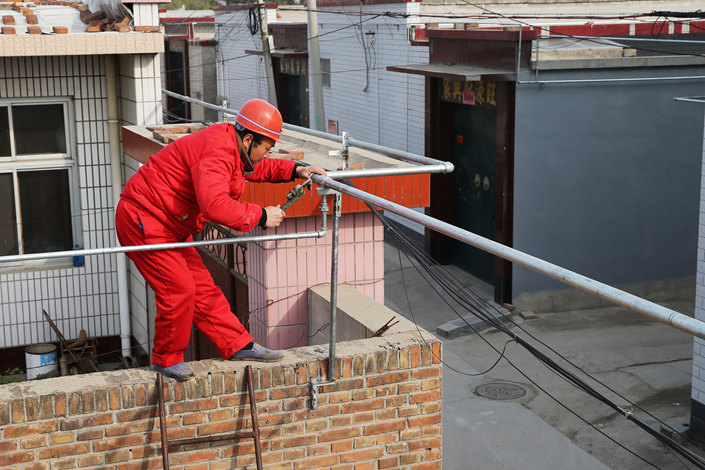 A worker installs gas pipes in a village in Cangzhou, Hebei province in November 2016. Photo: VCG

Last autumn and winter, China’s central government set ambitious targets for transitioning millions of households from using coal for heating to using liquid natural gas (LNG) or electricity instead in 28 cities, including Beijing, Tianjin, and cities in Hebei province and surrounding areas. But the “coal-to-gas” and “coal-to-electric” projects left many residents shivering last year due to gas shortages and problems with constructing adequate pipelines and power grids. The high price of the alternative energy sources also drew complaints.

In 2018, the push to move away from household use of coal — part of China’s efforts to curb pollution — has continued. According to an action plan released by the Ministry of Ecology and Environment, a further 3.62 million households in Beijing, Tianjin, and the provinces of Hebei, Shanxi, Shandong, and Henan were required to make the switch by the end of October.

Hebei alone aims to complete the change for 1.8 million households this year. Baoding, a city in Hebei about 90 miles southwest of Beijing, aims to transition 250,000 households away from coal, of which 28,000 will change to using electricity for heating, and 222,000 will switch to LNG. The city’s southern Qingyuan district is a microcosm of the coal-to-gas and coal-to-electric project.

Qingyuan is a traditional agricultural area of 867 square kilometers (335 square miles) and is home to 600,000 people across a number of small villages. Last year, the district completed coal replacements in 53,876 households, and began but did not complete the work in 66,096 households. In early November, Caixin visited several townships in Qingyuan to see the progress of the project.

LNG, electricity are not enough to stay warm

At the beginning of November, Wuluohou village in Qingyuan had a power outage nearly every day. The power grid was being rebuilt to handle the growing number of residents required to rely on electricity to heat their homes from late October to the end of March.

However, in order to complete the switch, Wuluohou villagers must buy their own indoor heating equipment. Most houses in the village are about 120 square meters (1,292 square feet), usually with a courtyard, two bedrooms, a living room and a kitchen. This requires a six-piece heating and cooling machine that costs 2,880 yuan ($416) after a government subsidy — a high price for a village with an average monthly income of 5,000 yuan.

In Chengzhong village, a resident surnamed Li told Caixin that his family switched to LNG for heating last year. During that winter, the temperature in his house was 14 to 15 degrees Celsius (57 to 59 degrees Fahrenheit), a full 3 degrees Celsius (5.4 degrees Fahrenheit) lower than when they burned coal. They spent 2,258 yuan on LNG over four months. Li told Caixin that with a monthly income of 3,000 yuan, “it is just too expensive to use gas for heating. We don’t dare raise the temperature.”

Another villager, surnamed Qi, in Chengzhong told Caixin that his house was 14 or 15 degrees in winter, colder than when they burned coal. However, he added that the switch “is good for the air, and we get blue skies and white clouds.”

Many villagers told Caixin that they had kept their coal stoves, and they are still burning coal this winter, buying 1 metric ton of “blue coal,” a type of clean coal also known as anthracite, for 900 yuan. There were also many illegal sales of dirtier coal, although the price has risen, from 760 to 780 yuan per metric ton.

The high price of the equipment alone was enough to make villagers despondent, but then came the electricity bills. Previously, the villagers could burn coal 24 hours per day during the winter, spending under 1,000 yuan for an entire winter of warmth. However, a household with a six-piece heater consumes 4.4 kilowatts (kW) of electricity per hour and 106 kW per day. With prices at 0.3 yuan per kilowatt-hour between 8 p.m. and 8 a.m. and 0.55 yuan per kilowatt-hour from 8 a.m. to 8 p.m., the cost quickly adds up, reaching about 5,400 yuan over four months. With government subsidies covering a maximum of 1,200 yuan, households must pay 4,200 yuan for their electricity in winter — double the price of coal, and less effective at keeping houses warm.

But beyond complaints that gas is less effective, it is not clear if local governments can afford the subsidies they are offering. Between subsidies for new heating equipment, electricity, and LNG, the district could be expected to pay 70 million yuan to its residents. In 2016, Qingyuan district’s fiscal revenue was 1.14 billion yuan.

Li and Qi from Chengzhong village have not been reimbursed for their LNG purchases last year.

From December to March last year, Li bought LNG three times, a total of 1,415 cubic meters (49,970 cubic feet), of which they used 941 over the four months, costing 2,258 yuan. In theory, Li’s gas should be subsidized at a rate of 1 yuan per cubic meter, but he hasn’t yet been reimbursed. Qi spent 3,084 yuan on LNG last winter, but also has not received the 1,200-yuan subsidy he expected.

In another village in Qingyuan, a man surnamed Hu told Caixin that last year he burned through 5,000 yuan in natural gas to keep warm, over twice the cost of coal. He, too, has not yet received his subsidies, and is worried that another shortage will cause the supply of gas to stop.

This year, the demand for gas during the heating season in Hebei is over 10.5 billion cubic meters, 3.4 billion more than last year. It is hoped that the supply this year will be enough to satisfy the growing demand.

In July, local newspaper Baoding Daily released a statement from the Central Environment Protection Inspection group reprimanding the city for failing to successfully transfer its residents to electricity and gas. “Due to the poor heating effectiveness of electric heaters, many residents in villages and communities that have completed the coal-to-electricity conversion still used coal-fired heating stoves for their heating,” it read. The statement ordered Qingyuan to improve its efficiency and find alternative sources of clean energy to ensure heating requirements.