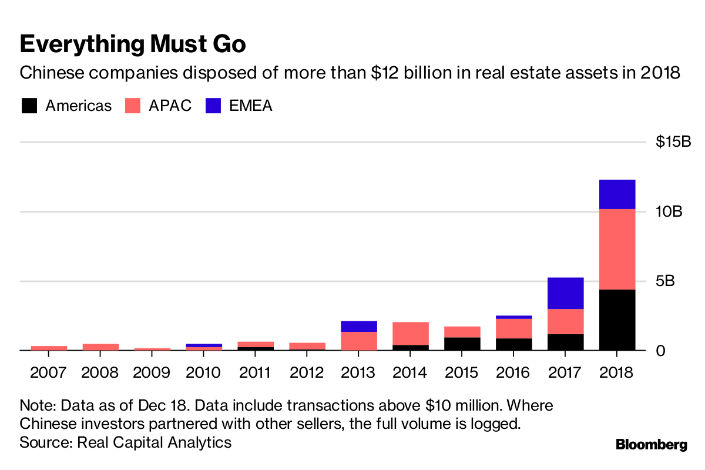 They include the 245 Park Ave. skyscraper in Manhattan, New York’s famed Waldorf Astoria Hotel and Chicago’s Vista Tower, under construction but envisaged as one of the city’s tallest buildings.

With economic growth slowing, keeping a tight rein on capital outflows is expected to remain a key theme for Beijing. That could see disposal records smashed again in 2019.

A forced liquidation was mandated and a “banned list” produced that dumped offshore property and hotels in the restricted basket, and casinos in the don’t-even-think-about-it one.

Still, it wasn’t until the end of that year the spending tapered off. In 2016 and 2017 combined, Chinese companies splashed out an unprecedented $89 billion on real estate.

In 2018, the deleveraging drive really started to take effect. Real estate asset sales by Chinese companies have surged to $12.3 billion since January, up from $5.3 billion the year prior, preliminary data compiled by Real Capital Analytics show.

“While capital controls remain in place, China won’t be the main driver of Asian outbound investment,” said Stephanie Yang, CBRE Group Inc.’s senior director of global capital markets. Buyers from places including Singapore and South Korea are already taking the place of Chinese in markets such as the U.S. and Europe, she said.

The asset sales were “driven in part by the government’s push to reign in the most aggressive buyers, but also by a requirement to reduce debt levels,” said Jeffrey Langbaum, a commercial real estate analyst at Bloomberg Intelligence.

Anbang’s unfettered spending, meanwhile, saw authorities seize control of the conglomerate in February and the insurer’s former chairman, Wu Xiaohui, sentenced in May to 18 years in prison after being convicted of fundraising fraud and embezzlement.

HNA has gone some way to making amends, ending 2018 as the No. 1 seller among the four and accounting for five of the 10 biggest property disposals. Even so, affiliate units have been missing loan and bond payments for months, evidence more cash needs to be brought in the door to overcome HNA’s liquidity challenges.

“The deleveraging trend will continue through the first half of next year,” said James Shepherd, the managing director of Greater China research at Cushman & Wakefield Inc. He said Chinese investors had often relied upon local banks to back their buying sprees. With that tap turned off, and refinancing pressures mounting, further assets sales are inevitable.

And there are willing buyers. A consortium including Ping An Real Estate Co. and China Life Insurance Co. sold a 13-story Boston building for $450 million in August, setting a record for an office transaction in the city.

“The ongoing uncertainties of the trade conflict will put pressure on foreign reserves and the value of the yuan, so capital controls will most likely continue in 2019,” Tom Moffat, CBRE’s Hong Kong-based head of capital markets Asia, said. That will mean ongoing “selective disposals from Chinese investors, whether they’re looking to strengthen their balance sheets or realize a decent profit from their early investments.”