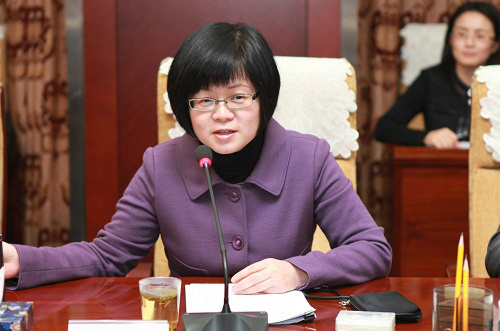 The association that manages China’s multitrillion-dollar interbank market has appointed a new chief, Caixin has learned from multiple sources.

Liu Wei, the new Communist Party chief of the National Association of Financial Market Institutional Investors (NAFMII), a central-bank-backed body that oversees the interbank market, officially took office Wednesday morning, sources with knowledge of the matter told Caixin on condition that their names not be used.

Founded in 2007, the NAFMII manages China’s over-the-counter financial market, which consists of the interbank bond, interbank lending, foreign exchange, commercial paper and gold markets, according to its website. Last year, a record 997.8 trillion yuan ($144.76 trillion) in assets were traded on the market, up 3.9% from 2016, according to official data (link in Chinese).

The sources described Liu, 53, as low-key, pragmatic and professional. Previously, she was party chief of the Central Foreign Exchange Business Center, an affiliate of the State Administration of Foreign Exchange (SAFE), China’s forex regulator. The center is responsible for handling the country’s $3 trillion of currency reserves. Before joining SAFE in 2010, she had worked for years at the monetary policy department of the People’s Bank of China.

Earlier this month, Liu’s predecessor, 58-year-old Xie Duo, was appointed chairman of the state-backed Silk Road Fund, according to an announcement by the fund. Established in Beijing in 2014, the fund is aimed at providing medium- and long-term financing support for trade and economic cooperation associated with China’s ambitious Belt and Road infrastructure initiative.

Notably, the NAFMII plays a critical role in running China’s bond market, which in recent years has become the world’s third-largest, behind those of the U.S. and Japan.

In November, nearly 97% of onshore debt was traded on the interbank bond market, which is overseen by the NAFMII, while the rest was traded on the Chinese mainland’s two major stock exchanges, which are regulated by the China Securities Regulatory Commission, according to government data. As of the end of November, China’s outstanding bonds totaled 85 trillion yuan, the data showed.

In August, the NAFMII, along with the top securities watchdog, banned Dagong Global Credit Rating Co. Ltd. from taking on new securities-rating business for one year after they found that the agency had charged exorbitant consulting fees to the companies it had rated. The ban marks one of the harshest punishments ever against a Chinese credit ratings agency, Caixin reported at the time.

China is further opening its bond market by allowing foreign players to independently assess the quality of bonds on the interbank market in a bid to encourage fair competition and improve the industry’s credibility.