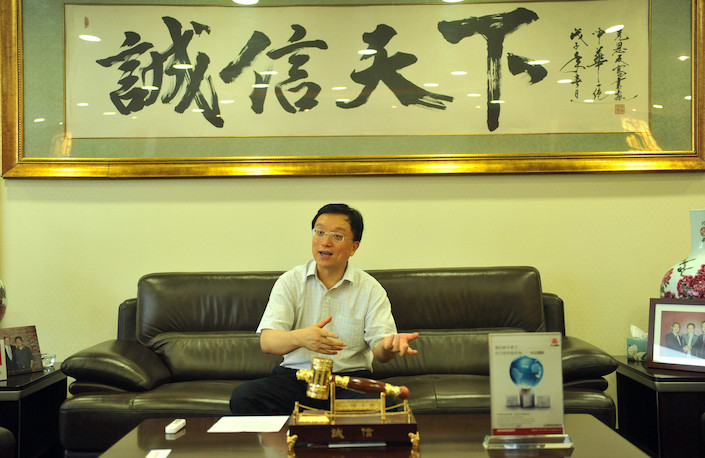 Dagong Chairman Guan Jianzhong sits beneath a work of calligraphy that reads "Integrity and credibility under heaven," on Sept. 2, 2010. Photo: VCG

* Dagong’s software cost around 9.7 million yuan, plus an annual service fee of about 800,000 yuan

* Some of the companies benefited from the higher credit ratings, which allowed them to borrow funds at lower interest rates

All companies looking for cheaper credit had to do was buy some expensive, useless software.

That’s the deal one of China’s largest credit ratings agencies had been offering to companies whose securities it rated, Caixin has learned from multiple sources with knowledge of the matter.

The details of the deal shed light on what Dagong Global Credit Rating Co. Ltd. did to get punished in a scandal that has further undermined the credibility of an industry designed to protect investors by providing them with impartial information.

On Friday, China’s top securities regulator and a central bank-backed industry group banned Dagong from taking on new securities rating business for a year in one of the harshest punishments ever against a Chinese credit ratings agency.

When the punishment was announced last week, the regulators revealed (link in Chinese) that Dagong was charging the companies that it rated exorbitant fees for consulting services, without offering details (link in Chinese) about the services.

Caixin has learned that Dagong required at least 26 bond issuers to purchase its consulting software before it would increase their ratings or the ratings of their bonds.

The software did little to improve the companies’ business, according to a bond market source who knows people who used it.

It also didn’t come cheap. “The (Dagong) software cost around 9.7 million yuan ($1.4 million), with an annual service fee of about 800,000 yuan,” a source at a securities firm told Caixin. “Many companies had quite a problem with this.”

Some of the companies benefited from the higher credit ratings, which allowed them to borrow funds at lower interest rates, the bond market source said. Essentially, the companies being rated were colluding with the agency rating them.

The regulators began investigating Dagong in July after receiving a tip from a whistleblower, Caixin has learned.

Linking the ratings business with other businesses has hurt Dagong’s credibility, a senior executive with a ratings agency told Caixin.

The government has implemented a series of rules for the credit ratings industry, but has not yet specified what constitutes a conflict of interest. Authorities plan to launch new rules to address the issue, sources close to the authorities told Caixin.

China is also further opening up its bond market by allowing foreign players to independently assess the quality of bonds on the country’s interbank bond market, in a bid to encourage fair competition and improve the industry’s credibility.