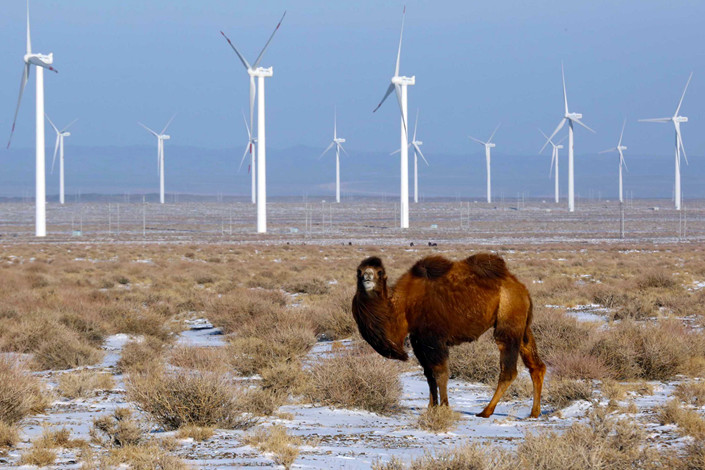 Local governments are approving more wind farms as less wind-generated electricity has gone to waste in China this year.

The energy watchdog of East China’s Anhui province has approved dozens of new wind farms this month, amounting to more than 1,000 megawatts of new installed capacity, according to Caixin’s calculation based on multiple announcements on a government website.

Earlier this month, Hubei province, Anhui’s western neighbor, gave the go-ahead to a handful of new wind power projects with investments of over 2.4 billion yuan ($350 million), according to Caixin’s calculations based on government data.

The approvals come as China has cut down on the amount of electricity that goes to waste at its wind farms. The country has pushed onward with a campaign to build up more efficient renewable energy infrastructure. In the first three quarters of this year, 7.7% of all wind-generated electricity nationwide went to waste, down from 12.4% during the same period in 2017, according to data (link in Chinese) from the National Energy Admission (NEA).

“In 2018, the operations of wind power plants have greatly improved,” Ren Yingjie, an analyst at Kaiyuan Securities, said in a research report released this week. In March, the NEA lifted a ban on building new wind power projects in Heilongjiang province, as well as in the Inner Mongolia and Ningxia Hui autonomous regions. The NEA instituted the ban because so much wind power had gone to waste in those areas.

In the first three quarters of this year, China’s new wind capacity connected to the grid rose 30% year-on-year to 12,600 megawatts, according to the NEA data.

Like many Western countries, China has embarked on a major campaign in recent years to build up its renewable energy infrastructure as it seeks to curtail its dependence on fossil fuels. However, that campaign has been hampered by poor planning and other issues that cause solar- and wind-generated electricity to go to waste.

In the first three quarters of 2018, a total of 22.2 billion kilowatt-hours (kWh) of wind-generated electricity was “wasted,” down 25% year-on-year, according to NEA data. Waste occurs when generators cannot send the electricity they produce to the power grid. The reasons for this vary, but can include inadequate transmission lines or a refusal by the grid operator.

Wasted electricity means wasted money. A total of 33.9 billion kWhs of electricity went to waste nationwide in 2015, leading to an estimated economic loss of more than 18 billion yuan, the official Xinhua News Agency reported in 2016 (link in Chinese).

As China’s economy slows, policymakers are also willing to boost infrastructure projects, especially those connected with renewable energy. Over the past few months, growth in China’s infrastructure investment has been basically been on a downward trend due to a previous clampdown on local government borrowing.