In Depth: What Are ‘Smart Deposits’? 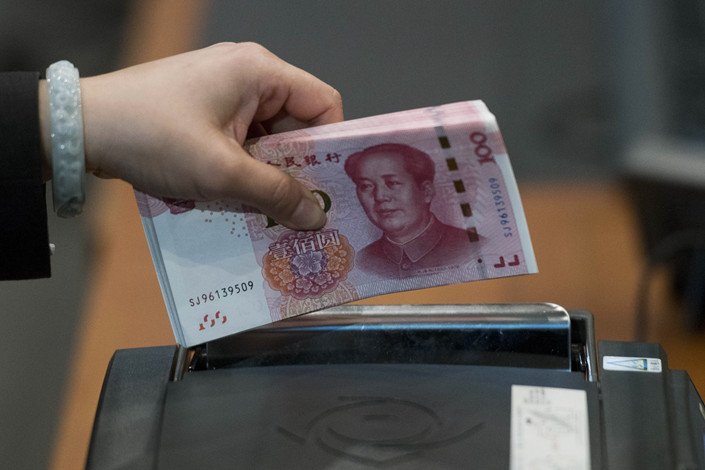 So-called smart deposits have caught the attention of regulators as questions have emerged about whether they violate rules for setting interest rates. Photo: VCG

* Smart deposits offer significantly higher interest rates than other timed deposits while allowing customers to withdraw their money ahead of schedule, though they then have to accept a lower interest rate

* Smart deposits might make sense for private banks, but the lack of regulation for these investment products has created confusion about what is and isn’t allowed

(Beijing) — Months after “smart deposits” captured the imagination — and savings — of many Chinese bank customers, private banks are now embroiled in a growing controversy over this new investment product, even as it has helped them stay competitive in the cutthroat battle for deposits.

Chinese banks have watched as financial regulators have clamped down on their sales of lucrative wealth management products and have limited their borrowing on the interbank market. The situation has forced many smaller lenders, particularly privately owned banks, to turn to what are called “smart” or “intelligent” deposits as a new way of attracting customers. These investment products offer savers higher returns than run-of-the-mill savings accounts.

At a glance, these investments look a lot like the “time” or “term” deposits that banks have been offering for years. By investing in these traditional products, bank customers agree to lock up a certain amount of money at a bank for a fixed period of time in exchange for a modestly higher interest rate.

More importantly, smart deposits allow customers to withdraw their money ahead of schedule, though they then have to accept a lower interest rate. The size of the reduction depends on how close the smart deposit is to maturity. This is the “smart” part of the product.

It’s a sweet deal for customers because they get the flexibility of a withdrawal-anytime-you-like savings account, while earning a much higher rate on their deposits. Private banks like the smart-deposits offering because their popularity with customers gives the banks an edge in the cutthroat battle for deposits.

However, smart deposits have caught the attention of regulators as questions have emerged about whether they violate rules for setting interest rates, analysts said.

China’s central bank has recently issued “window guidance” — or informal instructions — to some private banks about the investments, Caixin has learned from sources close to the regulator. In response, some have stopped selling these products. For example, WeBank has suspended sales of its “smart deposit+” products since Dec. 20, Caixin learned from the bank.

So how do smart deposits work, and why have they caught the attention of regulators?

AiBank, a licensed direct bank backed by Internet giant Baidu Inc. and China Citic Bank Corp. Ltd., the banking arm of state-backed conglomerate Citic Group, offers smart deposits. According to the product description, when savers ask to withdraw the deposit before maturity, the bank will activate an agreement it has with a third-party financial institution, such as a trust company.

Under such an agreement, the bank pays the third party the same fixed interest rate it had promised to pay the customer. In exchange, the third party continues to pay the customer interest at a variable rate that is based on how long he or she keeps money in the smart-deposit account. The arrangement allows the bank to shed some of the interest-rate risk while holding on to the customer’s deposit until maturity. The third-party institution makes its money by profiting from the difference between the interest rate it receives from the bank and the rate it pays to the customer, as well as a fee for taking over the interest payments to the bank’s customers.

The arrangement has allowed banks to sidestep central bank guidelines that require lenders to offer interest rates on the withdrawal of timed deposits before maturity that are the same as their daily demand deposit rates, which are usually below 1%.

Considering that some financial institutions pay 4% or more for smart deposits after withdrawals, these investment products could be problematic for regulators.

The design of smart deposits also implies that the third-party institution is liable for repaying the principal to the customer. But industry observers suggest this is a ruse. “In fact, what type of third-party institution has enough money to take over the banks’ interest payments to their customers? If institutions are that rich, why don’t they invest on their own instead of sitting on the tiny profit from the difference in interest rates?” one source in the banking industry asked.

A commercial bank source who is familiar with the business model said the so-called smart deposit is actually an expensive tactic to attract deposits, which has been camouflaged by a channel built between banks and trusts.

How banks and the third parties involved manage the principal of the deposits is also source of controversy. Before they start offering smart-deposit accounts, banks set up a pool of funds at a third-party institution, usually a trust, that it will tap whenever a customer makes an early withdrawal from a smart savings account, the bank source said.

The problem with smart deposits for regulators is that it remains unclear how to classify them, and thus how to regulate them, according to a source close to central bank’s monetary policy department. Smart deposits “cannot fully be considered deposits. At first they function like timed deposits, but later their form changes,” the source told Caixin.

From the perspective of Yulia Wan, a Shanghai-based banking analyst at ratings agency Moody’s Investors Service, productslike smart deposits reflect the intense competition for customer deposits among banks and from investments such as mutual funds and money market funds.

There are several risks related to smart deposits, she said at the sideline of a Moody’s credit conference on Dec. 6 in Shanghai.

For one thing, the interest rates on smart deposits cannot be guaranteed. Such products also put pressure on smaller banks’ profitability, as growth in smart deposits would come at the expense ofprofitability because banks have to bear a higher cost to bring in business.

Another regulatory source echoed the concerns about liquidity risk for smaller banks. Smart deposits can easily help small lenders attract deposits, but if their customers flee en masse, the banks could see their liquidity dry up, the source said. If that happened to enough small lenders, the risk could spread to the banking system.

On the other hand, some industry observers see smart deposits as one of the only ways left for small banks to compete for customer deposits.

In 2014, the government signed off on approvals for a new batch of private banks. The hope was that these banks would fill in the gap left by larger state-owned banks and lend to credit-starved consumers and small businesses. Four years later, however, these banks remain small because they have struggled to attract enough deposits to significantly expand.

Unlike the big state-owned lenders, whose connections with large companies give them access to sizable corporate deposits, private banks rely heavily on borrowing from the interbank market for funding. To expand their businesses, they need to be able to offer higher returns on deposits to lure customers, said Wang Yifeng, a Beijing-based researcher at China Minsheng Banking Corp.

The funding needs of private banks have only grown more acute since the banking regulator required that all lenders curb their interbank liabilities as part of country’s recent deleveraging campaign.

Tencent-backed WeBank, Chongqing-based Fumin Bank and Blue Ocean Bank, which is based in Shandong province, had particularly high mountains to climb because interbank borrowing accounted for nearly two-thirds of their liabilities at the end of 2017, according to their financial statements.

Some banks under similar pressure have turned to other funding methods, such as structured deposits — a complex savings product linked to financial derivatives. But private banks are barred from taking that road. “We have to shrink our interbank business. On the other hand, we can’t attract funds via structured deposits because we don’t have a license to trade derivatives. So it’s kind of natural for us to tap into smart deposits,” said the head of a private bank’s financial market department.

Smart deposits might make sense for private banks, but the lack of regulation for these investment products has created confusion about what is and isn’t allowed. Some have suggested that regulators should curb the expansion of smart deposits until they can better define them.

For China’s midsize banks, smart deposits represent an opportunity. But some wonder if they are worth the risk.

“We’re afraid of missing opportunities and losing customer deposits,” said a source at a midsize commercial bank. “But on the other hand, we are afraid that regulators might issue new rules that clamp down on growth of this product.”