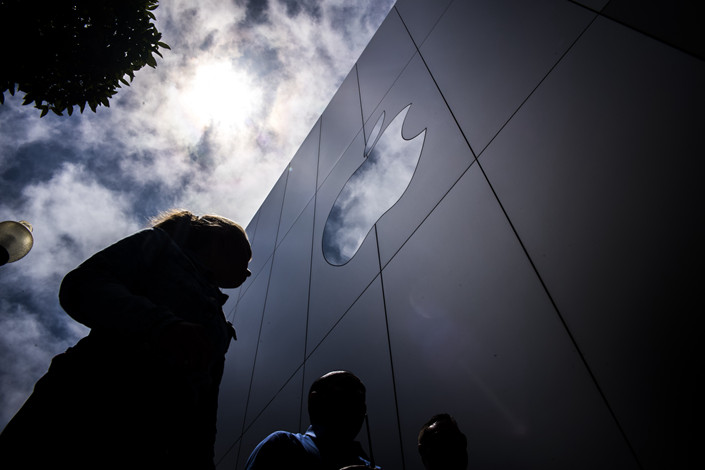 The news comes after weeks of signals the company is struggling to sell the latest iPhones released in September. Photo: Bloomberg

(Bloomberg) — Apple Inc. lowered its revenue outlook for the first time in two decades, citing fewer than expected upgrades to new iPhones, weakness in China’s economy and supply constraints to newer models of the Apple Watch, iPad Pro and AirPods.

Chief Executive Officer Tim Cook said Wednesday the company expects sales of about $84 billion in the quarter ended Dec. 29, down from earlier estimates of $89 billion to $93 billion. Apple reported sales of $88.3 billion in the fiscal first quarter a year earlier, so the new estimate would mean Apple is reporting a holiday quarter slowdown for the first time since Cook became CEO in 2011.

The announcement, in a letter from Cook to investors, sent shares down as much as 8.5 percent in extended trading. The reduction to the forecast comes after weeks of signals from inside Apple and its supply chain indicating the Cupertino, California-based company is struggling to sell the latest iPhones released in September. The flagship product earns Apple about two-thirds of its revenue, and allows the company to generate more money from attached products like Apple Watches, AirPods, and services like Apple Music.

“While we anticipated some challenges in key emerging markets, we did not foresee the magnitude of the economic deceleration, particularly in Greater China,” Cook wrote. Greater China and other emerging markets accounted for the vast majority of year-on-year iPhone revenue decline, but iPhone upgrades also weren’t as strong as the company anticipated in some developed markets, Cook said.

“The fact that they missed that wasn’t the shock,” said Daniel Ives, an analyst at Wedbush Securities. “It was the degree and how confined it was to China. The fact that China basically fell off a cliff was a jaw dropper, and combined with the lack of metrics, it makes investors feel like they’re walking blindfolded in the dark.”

Suppliers in Asia slumped on the news. SK Hynix Inc., a producer of memory for Apple, dropped as much as 4.3% in Seoul while Samsung Electronics Co., which makes chips and displays, fell 1.9%. IPhone assembler Hon Hai Precision Industry Co. lost 1.6%, as did rival Pegatron Corp. Taiwan Semiconductor Manufacturing Co. fell 2.5%.

Several key Apple suppliers overseas had cut their revenue estimates during the past few months, suggesting something was amiss. In November, the company said it would stop reporting unit sales of iPhones, iPads and Macs beginning in fiscal 2019. That sparked concern Apple wanted to avoid disclosing weak growth numbers. Apple’s stock had fallen 32% from an October peak to its close of $157.92 Wednesday amid growing concerns about the iPhone.

In December, Bloomberg News reported the company was facing a “fire drill” to boost iPhone sales, which led the company to aggressively market the product at lower than actual prices.

In his letter, Cook said the new iPhone models were released earlier than the flagship iPhone X last year, which creating a difficult year-on-year comparison. The iPhone X launched in November 2017, while the iPhone XS and XS Max were released in September.

“IPhone upgrades also were not as strong as we thought they would be,” he said, meaning the sales of new models to current customers replacing their old phones.

The CEO attributed much of the company’s “shortfall” in its outlook to struggles in China that he pinned on the economy and “rising trade tensions” with the U.S.

“As the climate of mounting uncertainty weighed on financial markets, the effects appeared to reach consumers as well, with traffic to our retail stores and our channel partners in China declining as the quarter progressed,” Cook said.

The timing of Apple’s announcement blaming its shortcomings partly on U.S. President Donald Trump’s trade war with China may increase pressure on American officials to ease the tensions quickly. Mid-level officials from the Trump administration are scheduled to travel to Beijing for talks early next week.

While iPhone revenue accounted for the forecast cut, Apple’s other product categories, including the iPad and services, grew a combined 19% year-on-year, he said. Services generated $10.8 billion in revenue for the quarter — a 27% increase from a year earlier.

Apple’s decision to cut its sales outlook, “isn’t a huge shock at this point,” said Shannon Cross of Cross Research. “It will be interesting to see how Apple shares react if there’s a China trade agreement.”