By Ren Qiuyu and Flynn Murphy 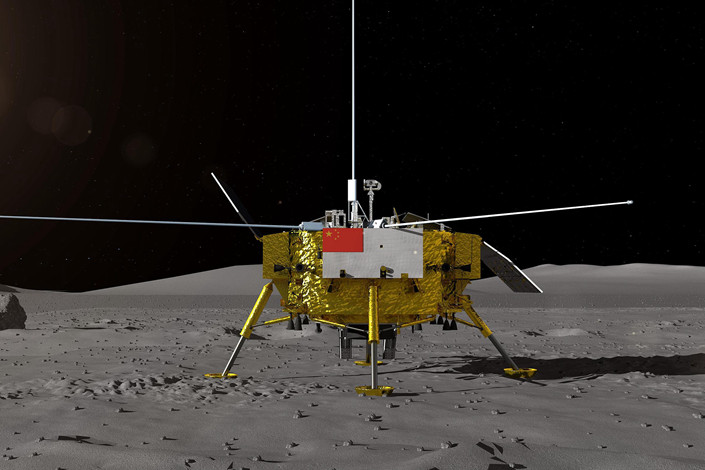 A model of the lunar probe Chang'e-4 is displayed during the 12th China International Aviation and Aerospace Exhibition in the southern city of Zhuhai on Nov. 7. Photo: VCG

China became the first nation to land a spacecraft on the far side of the moon Thursday morning, in what has been called a groundbreaking achievement for the country’s growing space program and for space exploration generally.

The Chang’e-4, a robotic probe consisting of a lander and a rover, touched down at 10:26 a.m. China Time in the South Pole-Aitken basin, a crater on the moon’s far side, the China National Space Administration (CNSA) said in a statement. The probe was launched from China’s Sichuan province on Dec. 8 and was expected to land between Tuesday and Thursday, though secrecy surrounded the timing and other details of the mission.

The landing showed China’s space program had achieved the technological capability required for a tricky project, said Richard de Grijs, an astrophysics professor who was until last year based at Peking University’s Kavli Institute. That’s because the moon takes the same amount of time to orbit the earth as it does for the moon to rotate once, in a phenomenon known as “tidal locking” that blocks direct radio signals from the earth to the moon’s far side. The Queqiao relay satellite China launched in May facilitated communication with the probe.

The craft began its historic descent at 10:15 a.m., according to the CNSA. Chinese media on Thursday released the first ever close-up photos of the moon’s far side, which were taken by the probe and sent to the Beijing Aerospace Command and Control Center.

On Thursday morning, rumors of the landing spread on Chinese social media. “Success!” posted Lin Xiaoyi, a science and space news blogger at 10:29 a.m. By 11 a.m., English-language Twitter accounts of the state-run media China Daily and CGTN had announced the successful landing, but the tweets were quickly deleted.

Finally, at noon, the nation’s state-owned television network CCTV announced in a 40-second segment at the top of the news that the Chang’e-4 had made its historic touchdown.

The touchdown marks the first soft landing on any part of the moon since the Soviet Luna 24 sample-return mission in 1976. Space programs in the United States and the former Soviet Union made intense efforts at lunar exploration in the 1950s, 60s, and 70s. However, moon missions waned after the Soviet Union collapsed and NASA directed funds toward international space stations and exploration of the rest of the solar system.

The far side of the moon was first photographed in 1959, and missions from Europe, India, Russia and America in the last two decades have already mapped it. But the Chang’e-4 landing opens the mysterious far side for up-close exploration.

Of particular interest to lunar scientists is the geological and mineral makeup of the landing site, said de Grijs, who now works at Macquarie University in Sydney. “They think that the lunar surface at the landing site could be made up of material that originated from the deeper lunar mantle, but which was thrust upwards by the most recent major impact, billions of years ago,” he said.

If the moon was formed from the same material as the Earth as many lunar scientists believe, studying the South Pole-Aitken basin could provide insights into the early Earth, de Grijs said. But it will be up to the third and final phase of China’s lunar exploration program, which will collect and return lunar samples, to determine the age and composition of such materials.