By Luo Guoping and Leng Cheng 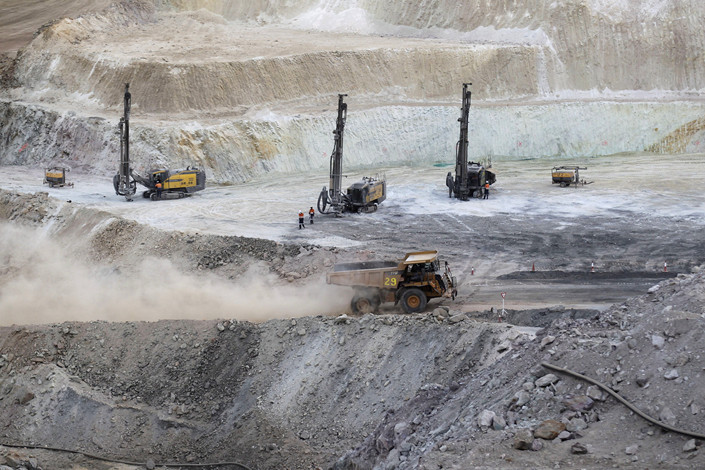 * Zijin’s Shanghai-listed shares dropped the 10% daily limit on the first trading day after the announcement, but rebounded 1.33% on Thursday

(Beijing) — Investors dumped shares of a state-owned metals miner after it announced plans to issue 8 billion yuan ($1.2 billion) in shares to acquire a Canadian mining company.

Shanghai-listed shares of Zijin Mining Group Co. Ltd., China’s largest gold miner, clawed back some of their losses Thursday after plunging by the exchange’s 10% daily limit on Wednesday, the first trading day after the announcement. The stock closed 1.33% higher on Thursday.

The sell-off reflected investor concerns about the share sale. Zijin announced Tuesday that it planned to issue as many as 3.4 billion shares in Shanghai to raise 8 billion yuan to fund its 9.36 billion yuan outright purchase of Toronto-listed miner Nevsun Resources Ltd., according to its filings to both the Hong Kong and Shanghai stock exchanges.

Zijin’s key stakeholders will be given priority in the sale, Caixin has learned.

However, some investors have questioned whether there is enough demand for new Zijin shares to fund the purchase of Nevsun, especially considering the struggles of China’s stock markets this year, Caixin has learned.

With the benchmark Shanghai Composite Index near a four-year low, neither Zijin shareholders nor other investors have much appetite for risk, one company investor told Caixin. Zijin shareholders also don’t relish the idea of increasing their stakes of a stock whose value is about to be diluted by the issuance of billions of new shares, particularly in a bear market.

Critical investors have focused on the pricing of the new shares. If the company issues all 3.4 billion shares under its plan, they would be priced at 2.35 yuan apiece. At that level, new investors could pick up Zijin shares at a nearly 23% discount to Thursday’s closing price of 3.05 yuan. Zijin’s Shanghai shares hit a 52-week high of 5.41 yuan in early 2018 before following the benchmark index lower over the course of the year.

In response to the sell-off, Zijin’s head of investor relations told Caixin on Wednesday that the sale of 3.4 billion shares represents only the top of the range. Furthermore, the final issuance price is still awaiting approvals from the board of shareholders and the China Securities Regulatory Commission.

Zijin has linked the Nevsun deal to the Belt and Road Initiative, China’s ambitious plan to forge investment and trade links with countries along the old Silk Road to Europe. The purchase will increase Zijin’s reserves in copper, zinc and gold to “serve its international strategy,” the company said in its stock exchange filing.

Before 2017, Zijin made more than $1 billion worth of offshore acquisitions in nine countries, including Australia, Russia and Peru. In December, the company closed a $350 million deal to take a 63% stake in Serbian copper mining and smelting complex RTB Bor. That money would be part of $1.26 billion that would be invested over the next six years on Bor’s operations. According to an estimate by Industrial Securities Co. Ltd., the slew of overseas acquisitions and investments has left Zijin in need of around 23.7 billion yuan in new funding over the next three years.

Nevsun’s current copper, gold and zinc resources are equal to 26.2%, 18.3% and 24% of Zijin’s present reserves in those metals respectively, the Chinese company said.

Zijin said it was the 14th-largest precious metal company in the world in 2017. At the end of that year, it boasted 1,320 tons of gold reserves, 31.5 million tons of copper reserves and 9.27 million tons of zinc reserves, according to its annual report. As of the end of September, Zijin held 91.27 billion yuan in total assets and 53 billion yuan in total debt, giving it a debt-to-asset ratio of 58%.