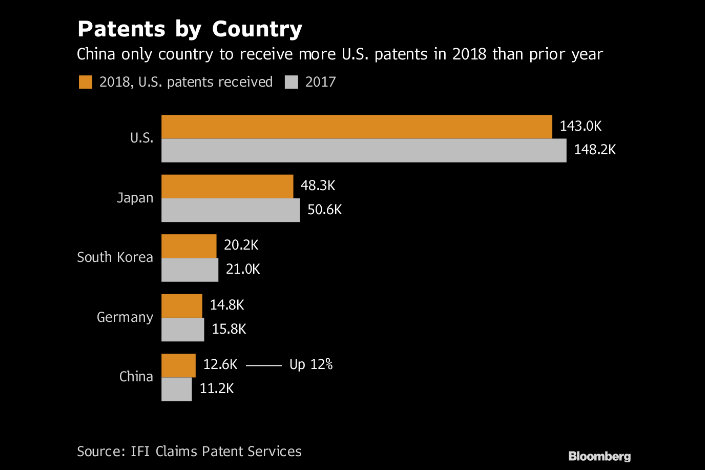 (Bloomberg) — Chinese inventors received a record number of U.S. patents in 2018 and are on pace to overtake Germany in the No. 4 position of top recipients, according to an analysis of filings with the U.S. Patent and Trademark Office.

Inventors working for Chinese companies were issued 12,589 U.S. patents in 2018, a 12% increase on the year before and a 10-fold increase over the 1,223 they received a decade ago. The U.S. still dominates the field, with 46% of the 308,853 U.S. utility patents issued last year, followed by companies based in Japan, South Korea and Germany.

Overall, the number of patents issued by the patent office declined 3.5% for the year, with every major country except China receiving fewer patents than the year before.

“The continuing push by China is very interesting,” said Larry Cady, senior analyst with IFI Claims. “China’s going to overtake Germany shortly — maybe not next year, but the year after.”

The world’s No. 2 economy has spent billions of dollars to fund research in key technology fields like artificial intelligence, quantum computing and biotechnology. It’s sparked a global technology arms race that’s at the heart of President Donald Trump’s trade war, as the Trump administration contends that China is stealing American know-how.

The steady rise in patent filings suggests Chinese companies are developing their own technology as well. The U.S. patent office has a process to challenge patents filed based on stolen ideas, although few such proceedings have been filed against anyone.

The decline in the total topline number of issued patents reflects fewer applications lodged in the past couple of years, though there was a slight uptick last year, Cady said.

While Cady said it’s hard to know why applications had fallen, some companies have been hesitant to seek patents amid confusion over what types of inventions would pass muster, particularly in the software fields, combined with a broader attack on the system by firms that claimed patents did more to hinder innovation than encourage it.

Patents, enshrined in the U.S. Constitution, are considered a “grand bargain” in which an inventor agrees to publicize how to duplicate their idea for others to build on, and in return gets exclusive rights to the invention for 20 years from the date of the application.

Six of the top 10 recipients of patents are U.S. companies, including chip rivals Intel Corp. and Qualcomm Inc., as well as Microsoft Corp. and Apple Inc. Automaker Ford Motor Co. was the only non-tech company in the top 10, and it’s been focusing a lot of effort on autonomous vehicles. The four Asian companies in the top 10 were South Korea’s Samsung Electronics Co. at No. 2, Canon Inc. of Japan, LG Electronics Inc., also from South Korea, and Taiwan Semiconductor Manufacturing Co.

“We use this as a way of driving innovation,” said Jeff Welser, vice president and lab director of IBM Research - Almaden. “The fact we’ve lasted 108 years is because we’ve been pushing this agenda of innovation. That’s what has allowed us to transform.”

Ford, Huawei Technologies Co. — the networking company that the U.S. has accused of being a security risk — and Chinese display-screen maker BOE Technology Group were the only companies in the top 20 to see double-digit increases over the year-ago period.

IBM’s new patents include more than 1,600 in artificial intelligence, 2,000 in cloud computing and 1,400 in cybersecurity. In all, the patents name 8,500 IBM inventors across 47 states and 48 countries, Welser said. Among his favorites are ones related to the company’s machines designed to debate and come up with the pros and cons of different arguments.

“IBM is committed to leading the way on the technologies that change the way the world works — and solving problems many people have not even thought of yet,” IBM Chief Executive Officer Ginni Rometty said in a statement.

While IBM has spent more than two decades getting more patents than anyone else, it doesn’t keep them all. IFI crunched the numbers and put Big Blue at No. 3 in a list of the ultimate owners of patents. Samsung, which makes phones, semiconductors, televisions and refrigerators, is at the top with 61,608 patent families, followed by Canon with 34,906 and IBM with 34,376.

“Samsung tends to keep their patents, whereas IBM sells a lot,” Cady said. “IBM is pretty careful — if they have a patent that’s not doing anything for them, they’ll let it go rather than pay fees on it.”

Welser said the Armonk, New York-based company sells a fair number of patents to other tech companies, contributes many to partners or projects based on open source technology, and lets some fall into the public domain.

And quantity doesn’t always turn into dollars. No drugmaker, for instance, hit the top 50 list of recipients.

“In pharmaceuticals, the patents are everything,” Cady said. “It determines how much you can charge for a drug. The patents are worth more, but they are smaller in number.”