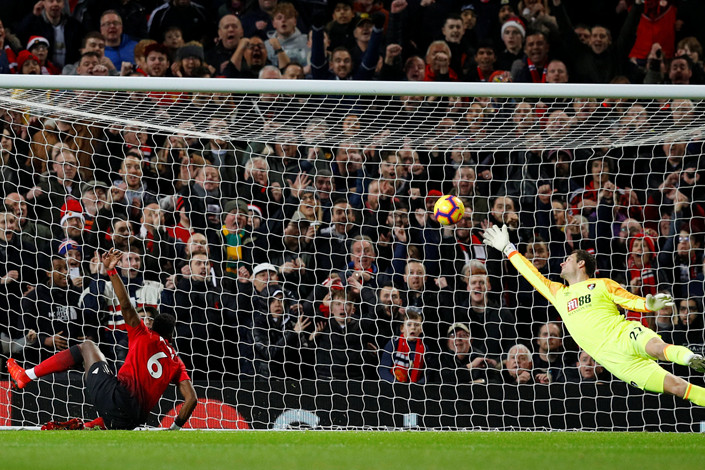 * Soccer team to partner with Shenyang-based Harves Group, but financial terms and the scope and number of planned centers was not disclosed

* Manchester United said each center will feature interactive attractions and exhibits, and include restaurants and a store

(Beijing) — English top-flight soccer team Manchester United is teaming up with a Chinese developer to kick off a series of “club-themed entertainment and experience centers,” tapping the country’s growing interest in the sport.

The first centers are scheduled to open by the end of 2020 in Beijing, Shanghai and Shenyang, the capital of Northeast China’s Liaoning province, the club said in a news release Tuesday.

Manchester United will partner with the Shenyang-based Harves Group for the project, the statement said. It didn’t disclose the financial terms, the scope of the centers, or the total number of planned centers.

China has qualified only once for the FIFA World Cup, playing in the 2002 tournament, but President Xi Jinping’s wish for the country to become a world soccer superpower by 2050 has spurred massive spending by Chinese clubs, which since 2015 have broken multiple spending records to lure foreign talent from top European clubs.

State media reported in October that this relentless spending might soon come to an end. The country’s soccer authority is considering caps on investment, player salaries, and transfer fees for the soccer season beginning in 2019.

Manchester United, which says it has 100 million fans in China, said visitors to the centers “will be able to experience the thrill of a matchday at Old Trafford as well as learn the history and heritage of English football’s most successful and storied club.”

“We first visited China in 1975 and we’re proud to have seen our fan base in the region grow and develop their passion for United over the years,” Manchester United’s group managing director, Richard Arnold, said in the statement. “This new concept will allow them to get closer to the club they love.”

The club said each venue will feature interactive attractions and exhibits, and include restaurants and a store.

The Beijing location will be close two major tourist attractions — Tiananmen Square and the Forbidden City.

In 2017, a Chinese-owned consortium purchased legendary Italian club A.C. Milan, reportedly for $788 million, but the deal fell apart in July 2018.

Ren Qiuyu contributed to this report.