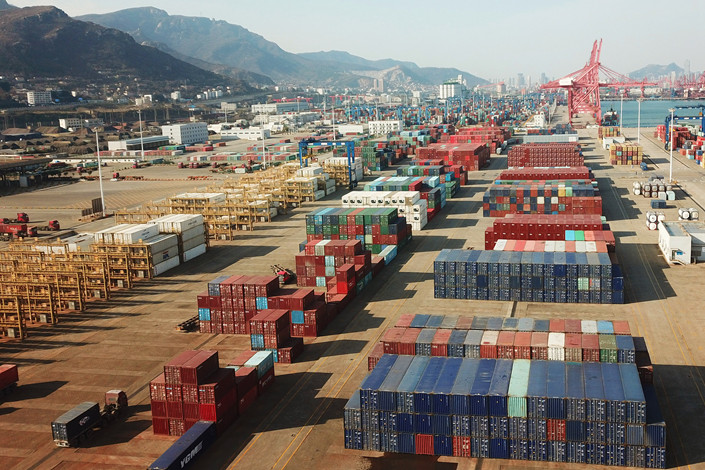 The container terminal of Lianyungang port in Jiangsu province on Dec. 8. Photo: VCG

China logged its lowest trade surplus in five years in 2018 as the increase in imports outpaced that of exports, government figures showed Monday, with the customs agency warning of a “grave external environment” and predicting slowing trade growth this year.

Looking ahead, Li pointed to the rising protectionism and unilateralism of “some countries” as one of the top risks that could weaken China’s foreign trade increase this year.

“We think the biggest concern remains the mounting uncertainties related to the complicated and grave external environment, as rising protectionism and unilateralism in some countries and slowing world economic growth may drag cross-border trade and investment,” he told reporters.

“(China’s) foreign trade expansion may decelerate” this year, he said, citing the unfavorable external conditions and high comparison figures from the previous year.

China’s ongoing trade war with the U.S. drove many Chinese exporters and their American customers to rush deliveries last year in an attempt to beat potential new tariff hikes by Washington, which has sparked concerns that the shipments may have depleted growth potential for this year. Analysts also voiced worries about a weakening global expansion that will further dampen demand for Chinese goods, as well as China’s slowing growth that will constrain its own imports.

Signs of a deceleration have already emerged.

Overseas shipments fell 4.4% to $221.25 billion in December, the largest dent in two years, with exports to major foreign markets including Japan, the EU and the U.S. all falling from a year ago. Purchases by other countries also dropped 7.6% to $164.19 billion, the deepest decline since July 2016, customs figures showed.

“Export growth dropped more than anticipated in December as global growth softened and the drag from US tariffs intensified. Import growth also fell sharply in the face of cooling domestic demand,” Julian Evans-Pritchard, an analyst with research firm Capital Economics, said in a note. “We expect both to remain weak in the coming quarters.”

The fall in last month’s exports to the U.S. suggested that the urgency among companies to rush shipments waned, Evans-Pritchard said, after Presidents Xi Jinping and Donald Trump agreed to call a truce in their trade war in early December to allow time to find a long-term resolution to their trade dispute by the end of March. The agreement postponed Trump’s previous threat to raise the additional tariffs on $200 billion of Chinese goods to 25% from 10% from the start of this month.

U.S. Treasury Secretary Steven Mnuchin said last week that Chinese Vice Premier Liu He is expected to go to Washington later this month for more trade talks, after the last round of negotiations in Beijing sent signals on progress in defusing the bilateral row.

Even though Chinese leaders in recent weeks have increasingly vowed to support domestic growth this year with more generous tax cuts and favorable policies to encourage lending to small and private firms, annual expansion is still expected to weaken to 6.1% from a projected 6.6% in 2018, he said.

“(T)he desire not to ‘overdo’ it (stimulus) will continue to shape the extent of policy easing and we expect policymakers to aim for a floor for growth rather than a pick-up,” he wrote in a report.

“The key downside risk is that credit growth does not pick up amid weak sentiment and a continued tight stance vis-a-vis shadow banking and local government debt.”

An earlier version of the story incorrectly calculated China’s imports to the U.S. in December. They fell by 35.8% year-on-year, not 3.6%.