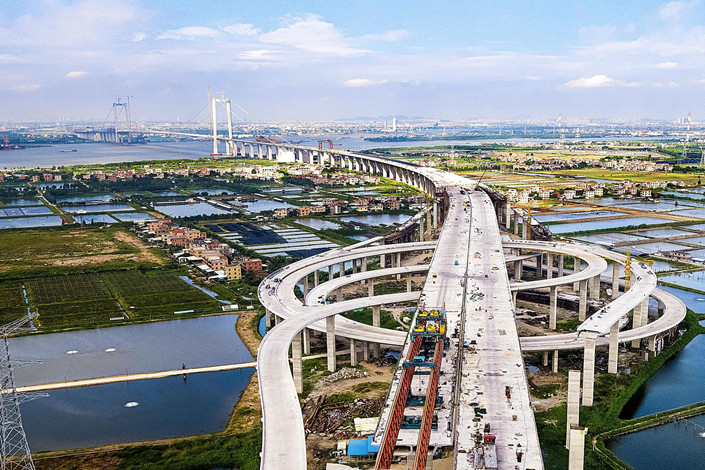 The Second Humen Bridge, which will help link the cities of Guangzhou and Dongguan in the Greater Bay Area of South China’s Guangdong province, is seen under construction on Nov. 20. Photo: VCG

The major southern trade city of Guangzhou plans to pour more money into the Greater Bay Area plan this year, in renewed efforts to realize Beijing’s quest for an interlinked coastal hub to rival those of Tokyo, New York and San Francisco.

Guangzhou’s city government plans to allocate 19 billion yuan ($2.8 billion) to the project this year, a 23% increase over last year, the state-run Xinhua News Agency said, citing a draft budget (link in Chinese) that the government submitted to the city’s legislature on Tuesday. The Greater Bay Area plan draws in nine southern cities on the Chinese mainland and the special administrative regions of Hong Kong and Macau.

This sum is nearly a quarter of the city’s fiscal revenue forecast of 81.8 billion yuan, which itself is up 5% on 2018, the city’s Communist Party-backed newspaper Guangzhou Daily (link in Chinese) reported, also citing the draft budget.

In a bid to build a financial technology hub, Guangzhou also plans to nurture the establishment of innovative futures exchanges in the city, as well as commercial banks in the Greater Bay Area, state media China News Service (link in Chinese) quoted Guangzhou Mayor Wen Guohui as saying during the city’s annual parliamentary session on Tuesday.

China has been trying to better connect the region for years. The respective local governments of Hong Kong, Macau and Guangdong province first floated the idea of an integrated Greater Bay Area in 2009, with a plan to capitalize on the region’s strong financial services, manufacturing and technology capabilities to build an economic and innovation hub. In December, several state-owned and privately owned companies from the mainland and Hong Kong launched a HK$100 billion ($12.75 billion) Greater Bay Area Homeland Development Fund to back high-tech industries.

Hong Kong, Macau, Guangzhou, and Shenzhen have unique strengths. Hong Kong continues to be a global financial hub; Macau maintains an edge in tourism and leisure; while Guangzhou and Shenzhen are both transitioning to high-tech manufacturing, according to a report by Citic Securities.