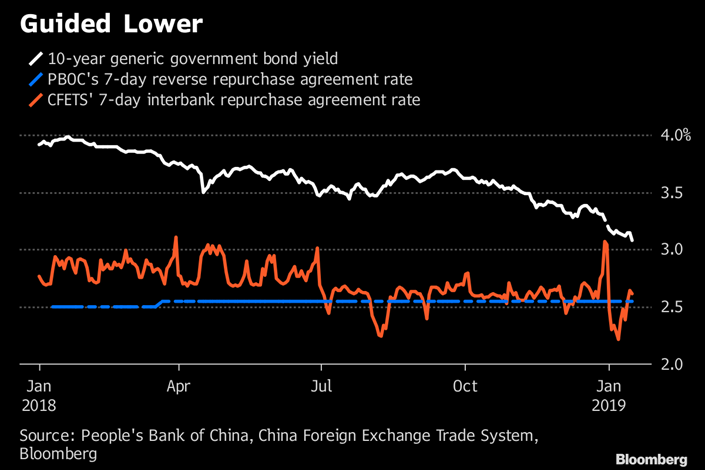 (Bloomberg) — The People’s Bank of China (PBOC) has been quietly guiding interbank borrowing costs down without actually cutting official interest rates, with the latest move a record one-day injection of cash into the market.

The central bank pumped in a net 560 billion yuan ($83 billion) into the financial system on Wednesday, the biggest open market operation on record. While that action was mostly aimed at addressing a funding shortage ahead of the Chinese New Year, it also speaks to a policy priority for the PBOC — providing cheaper funding to banks to allow them to lend to companies at lower rates.

The strategy works by replacing funding accessed by banks via more expensive routes, such as the medium-term lending facility, for cheaper shorter-term cash or releasing more reserves previously locked up to a wider range of lenders.

The strategy has been effective. The cost for banks to borrow from each other through 7-day repurchase agreements has been below the cost of the PBOC’s 7-day reverse repo for most of January, only picking up this week as companies withdrew money to pay taxes.

Ten-year government bond yields also declined to around 3.1% this month from more than 3.6% in September 2018. Credit growth exceeded expectations in December, indicating earlier efforts to spur lending are having an effect.

“The PBOC is increasingly using liquidity management, instead of cuts to benchmark interest rates, to reduce interbank funding costs, guide bond yields lower and give banks a bigger profit margin so that they can offer cheaper loans to customers,” said Ding Shuang, chief economist of Greater China & North Asia at Standard Chartered Bank in Hong Kong.

And that won’t change soon, according to Ding, who interprets the comments made by a PBOC official on Tuesday as implying that any cut to interest rates isn’t likely in the short term. Ding was referring to remarks by Deputy Governor Zhu Hexin, who responded to a question about interest rate cuts by saying that current monetary policy is “in line with the economic situation,” and the central bank will make use of existing tools first.

Economists expect the PBOC’s 7-day reverse repo rate, which is the policy rate for the interbank market, to stay the same all year.

One possible challenge to the central bank’s approach is the currency. The yuan has gained about 1.5% this month on positive signs for trade talks between China and the U.S., but if it starts depreciating again, that would leave less leeway for the PBOC to offer liquidity.

“The PBOC may keep its own rate on hold for now and wait and see what the Federal Reserve plans,” said Liu Peiqian, Asia strategist at Natwest Markets PLC in Singapore. “If the Fed refrains from hiking rates in March, the PBOC may consider lowering its rate a little.”