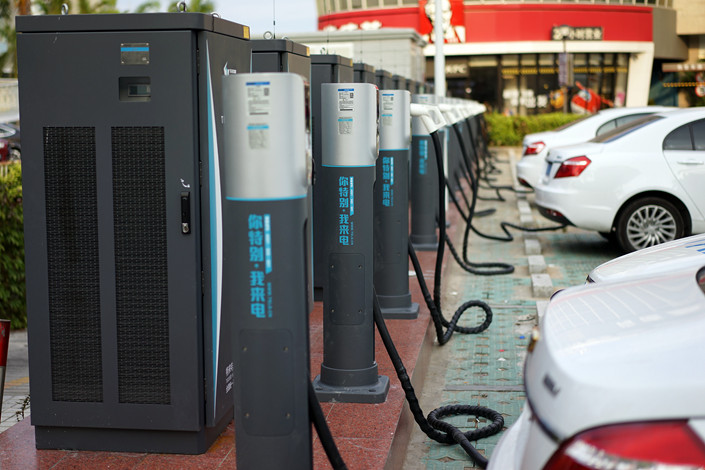 An industry group is urging the Chinese government to give foreign automakers more time to comply with Beijing’s production goals for electric vehicles, which take effect this month.

An auto group representative with the European Union Chamber of Commerce in China called the government’s goals for new-energy vehicles “challenging” to meet. “As far as I know, all the foreign companies are working very hard to comply with the policy,” the representative said Thursday.

The European Chamber represents European businesses in China, including many of the continent’s automakers.

Under the current auto policy issued in September 2017, foreign automakers have to ensure that new-energy vehicles, or NEVs, make up a specific proportion of the cars they produce. The requirement takes effect this month.

The quota policy is widely seen as a more market-based way for the Chinese government to continue to promote new-energy vehicles — or those that run on electric, hybrid-electric and fuel-cell technologies. The government has also employed financial incentives to promote the industry, but the current subsidy program, which helped China become the world’s largest market for electric cars, will end in 2020.

Under the current of policy, which is essentially a cap-and-trade system, any automaker that produces at least 30,000 vehicles will be required to obtain “new-energy vehicle credits” that amount to at least 10% of its total annual vehicle production. The automaker can earn credits by producing new-energy vehicles, though not at a 1:1 ratio. Depending on the type, the automaker can earn more than one credit for each vehicle it manufactures.

An automaker that earns more credits than it needs can then sell excess credits to automakers that have failed to meet their own quotas.

Some analysts estimate that new-energy vehicles would have to make up 4% to 5% of an automaker’s fleet for it to meet the current 10% requirement. And that percentage is scheduled to rise to 12% in 2020.

However, the government is already working on the next phase of requirements that will cover 2021 to 2023. It is this phase that the European Chamber is particularly worried about.

“From the industry perspective, even minor adjustments to the NEV credit system beyond 2020 will necessitate huge changes to enterprises’ R&D and production,” it said in a work report on Thursday.

The European Chamber has urged the government to consult more with foreign companies before any policy changes and give them more time to prepare.

Some foreign carmakers wasted little time meeting the government’s quota policy. In May, Volkswagen Group announced that it would open three new factories in China with its Chinese partner FAW Group Corp. The German carmaker aims to deliver up to 1.5 million new-energy vehicles to the market annually by 2025.

In addition, Daimler AG, which earlier that year announced that it planned to invest nearly $2 billion to set up a factory in China to manufacture Mercedes-Benz cars, including NEVs.