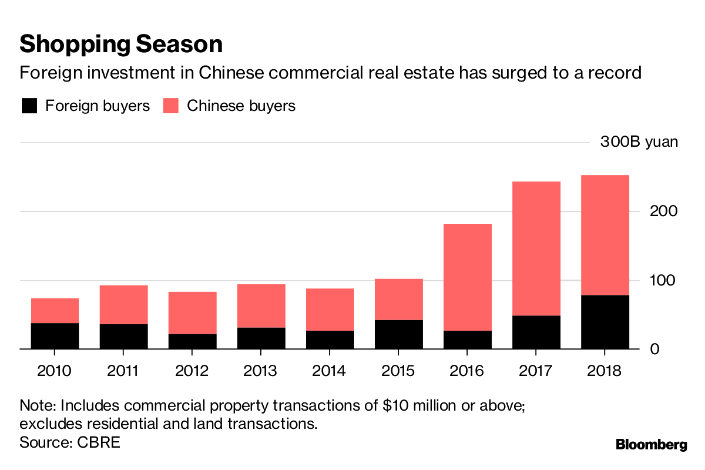 Overseas firms may be set to sustain a resurgence that last year sent their purchases to a record $9 billion nationwide and accounted for just over half of all sales in Shanghai. Blackstone Group LP and Singaporean developer CapitaLand Ltd. are among those leading the charge.

“For years, every time a foreign investor prepared a bid, they’d ask me — ‘how many domestic bidders do you have now?’ When I said ‘several,’ they were very upset,” said Colliers International Group Inc. head of China capital markets Betty Wang. “It totally reversed course last year.”

Offshore buyers are aided by a weak yuan that makes purchases cheaper and the tight financial conditions that mean many Chinese companies are more likely to be sellers than purchasers. The serious financial firepower on tap for foreigners includes the $15.6 billion raised for Asian property private equity funds last year, according to market research firm Preqin Ltd.

Overseas firms bought 31% of commercial property nationwide last year, based on CBRE data for deals of $10 million and above. They may account for as much as 40% of sales in Shanghai and Beijing combined in 2019, according to Colliers. The constraints holding back local firms include rule changes in late 2017 that made it harder for property private equity funds to raise money.

CapitaLand and Singapore sovereign wealth fund GIC Pte. Ltd. splashed out $1.8 billion on Shanghai’s tallest twin towers in the biggest purchase of 2018. Yields have been ticking up in the city’s central business district. Blackstone in December bought an office and retail complex in the city for $1.25 billion.

While the bulk of purchases by foreign investors are in Beijing and Shanghai, cities such as Hangzhou, Nanjing and Wuhan are attracting interest on the prospect of rising yields, according to CBRE’s Xie. Hot market segments include rental apartments and logistics, he said.

Commercial property investment by foreign firms surged 62% to 78 billion yuan ($9.1 billion) in 2018, the largest amount in data stretching back to 2005, CBRE said.

“While foreign investors have spent a lot, they haven’t used up their ammunition,” said Francis Li, Cushman & Wakefield Plc’s head of capital markets in Greater China. “Foreign capital will be a sweeping force in China commercial property investments this year.”