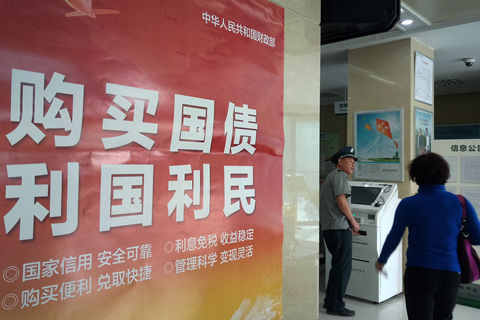 China’s top leadership set a tone for prudent monetary policy as “neither too tight nor too loose.” Photo: VCG

China will strengthen targeted funding support for the economy but will shun across-the-board quantitative easing (QE) to keep its debt problems in check, a source close to the central bank told Caixin, downplaying expectations for aggressive monetary loosening sparked by remarks from a finance ministry official.

A senior official at the Ministry of Finance recently called for the use of treasury bonds as quasi money, drawing speculation that China might be planning to use large-scale bond purchases to inject liquidity into the world’s second-biggest economy as growth slows. But a source close to China’s central bank has downplayed the idea.

In quantitative easing, a central bank increases the supply of money by purchasing government and other bonds with cash. Following the 2008 financial crisis, the U.S. Federal Reserve bought massive amounts of debt and poured trillions of dollars into the world economy. The American central bank’s years-long QE program is credited with preventing the Great Recession from turning into a global depression. Central banks in Japan, the United Kingdom and elsewhere have similarly followed QE strategies in recent decades.

China’s finance ministry will study how to enhance the role of treasury bonds as a principal tool for the central bank’s open market operations, expanding their use in the transmission of monetary policy, Guo Fangming, deputy director of the Treasury Department under the Finance Ministry told an economic forum Wednesday, according to a report published by the state-run Securities Times.

A person close to the Finance Ministry told Caixin that the ministry and the central bank have been in discussion on how to improve coordination between government bonds and monetary policy.

“If you look at what the developed countries have done, you will have an answer,” the person said. “We hope the process could speed up.”

But a source close to China’s central bank has downplayed the idea of treating treasury bonds as quasi money. The person told Caixin that treasury bonds, even though they are regarded as high-quality liquid assets by regulators, are not a payment tool and therefore are not so-called quasi money.

The PBOC has rolled out a series of countercyclical measures, including cutting the reserve-requirement ratio four times last year and once more earlier this month, and providing lower-cost liquidity to banks willing to lend more to smaller companies.

Liquidity currently is reasonably ample, providing sufficient financial support for the real economy, and there is no need to provide large-scale liquidity through QE, the person close to the central bank said.

During 2001 to 2003, the PBOC purchased and sold treasury bonds on the open market to adjust the money supply. But the central bank later found it didn’t have enough treasury-bond holdings to hedge large amounts of liquidity. So the PBOC began to issue central bank bills to manage liquidity.

At the Central Economic Work Conference held at the end of 2018, China’s top leadership set a tone for prudent monetary policy as “neither too tight nor too loose” while maintaining market liquidity at a reasonably ample level, emphasizing the need to avoid “flooding the market with liquidity”.