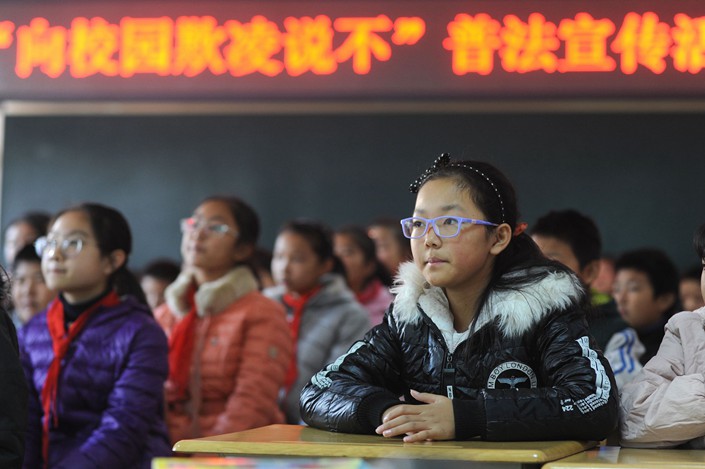 An attack on an 8-year-old girl that left her genitals seriously injured provoked outrage as family members, teachers, and local police all point fingers, throwing into question the official version of events.

The official version states that on Dec. 14, two male classmates ages 6 and 7 “beat and poked” the girl with a broomstick at Yanzhuang Primary School in Northwest China’s Gansu province after she allegedly stole an eraser and refused to return one yuan (15 U.S. cents) she had borrowed.

The girl was taken to a local hospital and then sent to Xi’an Children’s Hospital, 160 miles away. She arrived with “perineal trauma and pain,” and had been “bleeding for 10 hours,” hospital records provided by her family show. An examination found that she had suffered a “serious injury to her vaginal wall.” She was discharged from the hospital on Dec. 18.

The family believes the teacher was somehow involved in the incident, they told the Beijing Youth Daily. According to the girl’s grandfather, she was sent home from school at lunchtime the day of the incident when her teacher accused her of stealing a tube of lipstick. He said he confronted the teacher that afternoon.

In the absence of any proof, the girl was admitted back to class and her grandfather went home, Beijing Youth Daily reported. The attack took place later that day.

On Jan. 13, the local departments of public security and education in Ning county, Qingyang city announced said that the two boys would not be punished by the public security department since they were under the age of 14, the minimum age of criminal responsibility in China. The boys’ parents would “bear civil liability,” they said, and were instructed to “strictly discipline” their children.

The identity of the teacher involved has not been publicly confirmed, but the Beijing Youth Daily reported she was questioned after the incident and was taken in for another round of questioning on Jan. 16. Investigators said the school principal and vice-principal had both been sacked.

One of the boys involved, a 7-year-old, apparently told the Beijing Youth Daily that the teacher was not present during the beating and subsequent injury.

“It doesn’t mention where the teacher and students were at the time,” he said.

While a report released in September last year found that the number of crimes committed at schools was declining, Ding said the incident was worrying given the age of the children and the nature of the injuries. “We should reflect on where the problem lies,” he said.