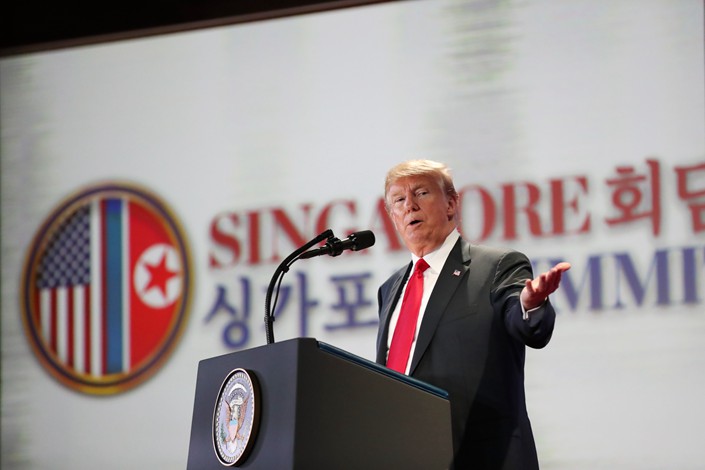 (Bloomberg Opinion) — U.S. President Donald Trump and North Korean dictator Kim Jong Un have agreed to meet for a second summit at the end of next month. Agreeing to this was probably a mistake — but to have any hope of producing results, Trump will have to prepare much more carefully than he did last time.

There’s been virtually no progress in meeting even the vague goals set out in the communique from the first summit. The North has taken only cosmetic steps toward dismantling its nuclear and long-range missile programs, while continuing to produce missiles and fissile material. And it has so far refused to provide an inventory of its arsenals — a minimum starting point for more detailed negotiations.

In addition, the president goes into this new summit weaker than before. He is battling a newly empowered opposition in Congress and assorted scandals. The coalition confronting North Korea looks increasingly shaky: Ties between South Korea and Japan are fraying, and China might withhold support to gain leverage in trade talks with the U.S. Meanwhile, leaders in Seoul and Beijing are eager to resume business with the North, undermining the “maximum pressure” campaign Trump insists will continue until the North denuclearizes.

Given all this, there’s a heightened risk that Trump will agree to any deal he can tout as a win. Some experts fear he may trade the U.S. troop presence in South Korea — for which he wants Seoul to pay more — for a ban on North Korean intercontinental ballistic missiles. That might reduce the immediate threat to the U.S., but would leave the North a de facto nuclear power and leave Japan and South Korea less safe.

For the U.S., the challenge remains to establish a plan to identify, cap, freeze and eventually dismantle North Korea’s nuclear and long-range missile capabilities. This may require some diplomatic creativity, for instance by splitting talks into two tracks, one focused on negotiating a peace treaty and the other on denuclearization. It will certainly demand judicious concessions from the U.S. as well as the North, and close coordination between the U.S., China, Russia, South Korea and Japan.

Trump needs to go into this new meeting with a framework of this kind fully worked out. That will take diligent work by diplomatic staff — effort that Trump tends to disdain. If the president won’t empower his aides to do what’s needed ahead of time, he’d have been wiser to deny Kim another public relations win.