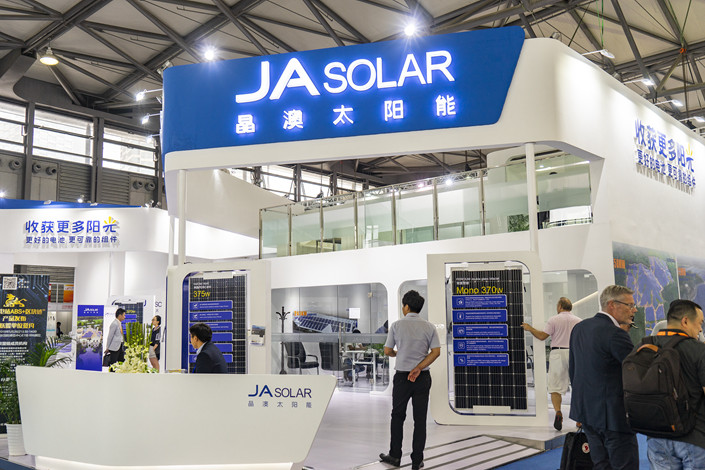 JA Solar's booth at an industry fair in Shanghai on May 30. Photo: VCG

Solar module giant JA Solar will make a backdoor listing in Shenzhen in a deal that values its assets at 7.5 billion ($1.1 billion), becoming the first formerly U.S.-traded company from its sector to relist at home.

China has said it would welcome such backdoor listings for quality Chinese firms that want to return home after their shares stagnated in overseas markets. That backdoor listing process typically sees the returning Chinese firm agree to sell itself to an existing listed company, often called a “shell company.” The listed shell company then issues a large amount of new shares that give overwhelming control to the new owner.

For its listing, JA has reached such an agreement with Tianye Tolian Heavy Industry Co. Ltd., a money-losing maker of heavy equipment that has been listed in Shenzhen since 2010. Tianye will purchase all of JA Solar’s assets by issuing JA’s owners 953 million new shares priced at 7.87 yuan apiece, according to an announcement from Tianye. That amount values JA Solar’s assets at 7.5 billion yuan.

Tianye’s shares have risen by the daily 10% limit over the last two trading days, giving the company a current market value of about 4 billion yuan, or about 62% more than JA Solar was worth when it privatized from New York for $362 million last year. With such backdoor listings, the shell company’s share price typically rises until it reaches a new equilibrium that often values the new entity at higher levels than the formerly overseas-listed company had previously received while listed offshore.

JA Solar was one of about three dozen U.S.-listed Chinese companies that launched privatization bids in 2015 on the belief their shares were undervalued and that they could get better valuations back at home. A number of other companies have made similar backdoor listings in China since leaving New York, including outdoor advertising specialist Focus Media and hotel operator Homeinns. But JA Solar would become the first returnee from the solar sector.

The company’s re-listing has been among the fastest for the group of returning companies. It signed its initial agreement with Tianye shortly after it completed its de-listing from the Nasdaq last July. By comparison, larger peer Trina Solar has also de-listed from New York but is still in the process of trying to make a similar backdoor listing in China. Formerly U.S.-listed wind-turbine maker Ming Yang Smart Energy Group Ltd. is also in the process of making a backdoor listing in Shanghai.