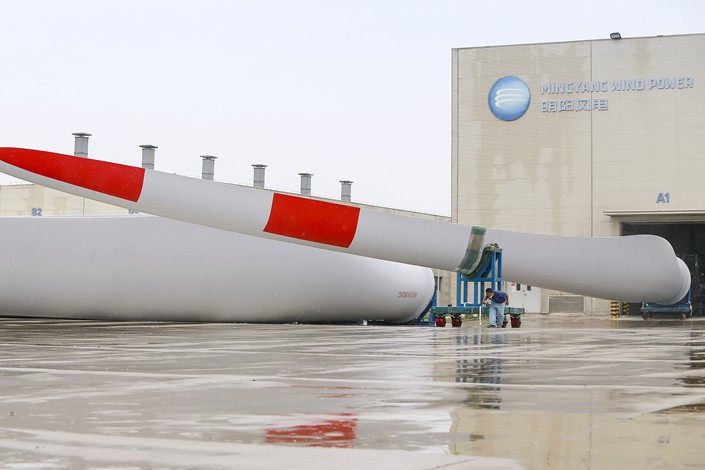 The Mingyang wind-power production plant is seen in Tianjin on June 9. Photo: VCG

Wind-turbine manufacturer Ming Yang Smart Energy Group Ltd., which delisted from the New York Stock Exchange in 2016, is planning to make a comeback on the Shanghai stock market next week.

Ming Yang, one of the country’s largest manufacturers of turbines for generating wind power, will use some of the proceeds from its initial public offering (IPO) to fund 1.24 billion yuan ($180 million) of investments in four projects, including the construction of wind farms and facilities to make turbine components for offshore wind-power generation, according to a preliminary prospectus filed with the Shanghai Stock Exchange on Wednesday.

Pricing of the shares began Friday and will end on Monday, with trading set to begin on Jan. 11, the company said in the prospectus (link in Chinese), which did not give a price range for the shares or state the amount of money that the IPO aims to raise.

Based in the southern city of Zhongshan, Guangdong province, Ming Yang is involved in the manufacture, sale and maintenance of wind turbines, related components and system solutions, according to its prospectus. It has also branched out into operating wind farms. The company, which had a total debt of 15.36 billion yuan as of June 30, is controlled by its founder, Zhang Chuanwei, and his wife, Wu Ling, who between them hold a 38% stake, the prospectus shows. Ming Yang’s debts have jumped 30% since the end of 2015, and its debt-to-assets ratio stood at 77% at the end of June.

In its previous incarnation, Ming Yang Wind Power Group listed on the New York Stock Exchange in October 2010 at $14 per share, raising $350 million. But after the shares slumped and profits fell, Zhang announced in November 2015 that he was taking the company private at $2.51 per share in a deal paid for through cash that was provided by investors and debt financing. At the time, its shares were trading on a price-earnings ratio of 6.5 times, compared with at least 12 times for similar companies listed in China, according to domestic media reports. The company finally delisted in June 2016.

Ming Yang was one of dozens of U.S.-listed Chinese companies, including technology firms Focus Media and Qihoo 360, that went private in 2015 and 2016 as they fell out of favor with Western investors after a string of accounting scandals and fraud. The companies planned to relist their shares on mainland stock markets where they could obtain higher valuations.

China’s wind- and solar-power industries are facing a shake-up after years of rapid expansion fueled by generous state subsidies aimed at promoting renewable energy as the country sought to curtail its dependence on polluting fossil fuels. The system of state support led to the construction of huge amounts of wind and solar power capacity but also created waste through poorly planned projects that couldn’t be connected to the grid or operate profitably at subsidized prices.

Faced with overcapacity and the failure of renewable power plants to get their electricity onto the national grid, the government has been winding down its support. It also introduced a system of competitive bidding for builders of new wind farms, which means operators of the projects will not be able to sell power to the grid at artificially high prices.

The campaign to cut down on waste has seen some success. In the first three quarters of this year, 7.7% of all wind-generated electricity nationwide went to waste, down from 12.4% during the same period in 2017, data from the National Energy Admission (NEA) show. That’s prompted local governments to restart approvals for new wind farms.

“The company has become more mature in the investment, construction and operation businesses of wind farms, which has become an important source of revenue,” the company said. In the first nine months of 2018, revenue from the power generation business rose 276% to 480 million yuan and accounted for 10.8% of the company’s total revenue, according to the prospectus.