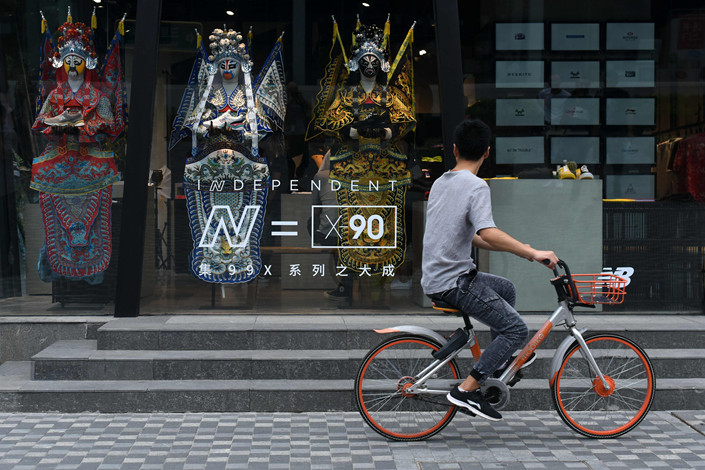 A man rides a Mobike bicycle past a New Balance store in Beijing on Sept. 1. Photo: VCG

Internet giant Meituan Dianping will rebrand Mobike and move China’s leading shared-bike service into its own app, in its first major moves to overhaul the firm it bought for $2.7 billion in April.

“The acquired Mobike bike-sharing business will be rebranded as Meituan Bike, with exclusive access to be available through the Meituan app,” Meituan said in a news release on Wednesday, citing an internal letter issued by co-founder Wang Huiwen earlier the same day.

The bike-sharing service will be incorporated into Meituan’s own suite of location-based services, which include ride-hailing and futuristic unmanned delivery projects. Wang also announced that employees now working in Mobike’s Beijing offices will move to Meituan’s Beijing headquarters by the end of next month.

China has emerged in the last two years as a leader in a new generation of dockless shared-bike services that use GPS to let users locate, unlock, ride and then park loaner bikes for small fees using a smartphone app. But like many such new industries in China, the sector quickly attracted lots of new players. Beijing Mobike Technology Co. Ltd. and chief rival Ofo were among the earliest arrivals and emerged as the two dominant operators.

Lately the sector has been haunted by liquidity problems, with most players making big losses amid rampant price wars and bike theft and damage. Mobike found a savior in April in Meituan, but Mobike dragged on its patron’s bottom line as Meituan made its own blockbuster initial public offering (IPO) in Hong Kong last fall.

According to Meituan’s IPO prospectus, Mobike posted a gross loss of 407 million yuan ($59.8 million) in the first four months of last year, while taking in 147 million yuan in revenue.

Ofo has stayed independent and found itself in an even-more dire cash-bleeding situation, as users clamor for refunds and the company dismisses staff.

Meituan declined to comment on whether its app will formally become the sole entry point for Mobike services, completely replacing the current dedicated Mobike app used by most of the service’s subscribers. At the moment, a user can rent a Mobike using either the Mobike or Meituan app.

News of the first service’s first major changes come about a month after Mobike’s founding team left the company, including CEO Hu Weiwei. In a departing letter, Hu said she was handing over the reins to current President Liu Yu, a former Mobike consultant who came to the company shortly after it was purchased by Meituan Dianping in April.

As one of the world’s biggest lifestyle platforms, Meituan went public in Hong Kong in September. The company operates food delivery, restaurant rating, ride hailing, and many other commercial city services. But observers said the company may have lacked the time and energy to implement practical business strategies for Mobike in the months just before and after its listing.