Meituan-Dianping Seeks up to $4.4 Billion in Hong Kong Offering 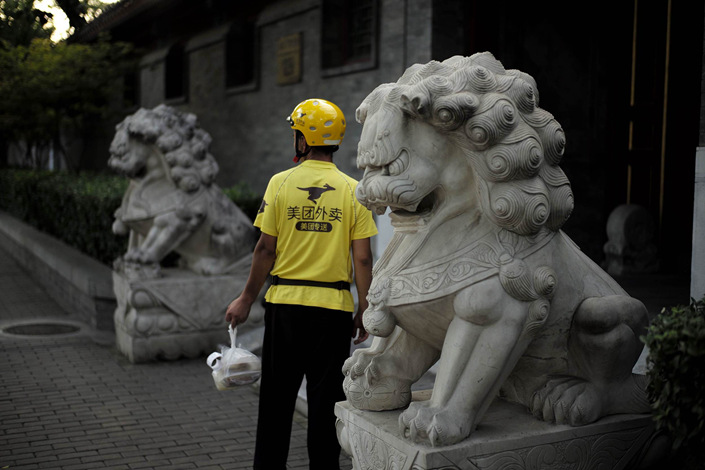 A Meituan worker delivers food to a residence in Beijing on Aug. 31. Photo: VCG

Meituan-Dianping, a leading online, on-demand services provider and China’s largest group buying platform, started a global roadshow Tuesday for what is likely to become one of this year’s biggest internet IPOs in Hong Kong.

At the high end of its pricing range of HK$60 ($7.64) to HK$72, the offering of 480 million shares could raise as much as $4.4 billion, according to roadshow documents obtained by Caixin.

The Meituan listing is expected to be another blockbuster tech flotation in Hong Kong this year. But investors are watching closely after Chinese cellphone-maker Xiaomi Corp.’s highly anticipated debut in July turned out to be lackluster.

In its prospectus, Meituan disclosed it is backing away from plans to expand its nascent ride-hailing service and reported substantial losses by its Mobike bicycle-sharing unit. Meituan had losses for 2016, 2017 and the first four months this year. The company said it plans to use the IPO proceeds to upgrade its technology, develop new services and products and pursue acquisitions, among other things, according to the prospectus.

The IPO would put Meituan’s value at $45.5 billion to $54.7 billion, sharply higher than less than a year ago in Meituan’s latest funding round, when the company was valued at $30 billion.

Meituan plans to sell 5% of the IPO to public investors in Hong Kong and the rest to global institutional investors, its prospectus showed.

The company began taking orders from institutional investors Tuesday and retail investors Friday. The stock is expected to be priced Sept. 13 and start trading Sept. 20 on Hong Kong’s main board.

Meituan would also become the second company listed on the Hong Kong bourse with a dual-class share structure, after Xiaomi, under the exchange’s new rules designed to attract tech companies. The dual-class structure would give founders and management greater voting power than outside shareholders.

Meituan has secured a total of $1.5 billion of subscriptions from five cornerstone investors, including its main backer, tech giant Tencent Holdings Ltd., and global asset manager Oppenheimer Funds. Cornerstone investors have become a regular feature of Asian IPOs in recent years to stimulate investor demand and lend credibility to an IPO. Cornerstone investors are subject to a lock-up period of at least six months following the listing date.

As Meituan’s largest stakeholder with 20%, Tencent has subscribed for $400 million of its IPO shares. Tencent made a $4 billion strategic investment in Meituan in October.

In its updated prospectus filed Tuesday with the Hong Kong Stock Exchange, Meituan for the first time disclosed the financial statements of bike-sharing startup Beijing Mobike Technology Co. Ltd., acquired in April for $2.7 billion. The deal was brokered by Pony Ma, CEO of Tencent, which is a big backer of Mobike, sources close to the matter told Caixin.

During the four months through April 30 this year, Mobike had revenue of 147 million yuan ($21.5 million) and a gross loss of 407 million yuan, according to the filing.

Mobike has spent heavily on expanding its fleet and grabbing market share by selling rides below cost in the highly contested market where its main rival is Ofo, known for its trademark yellow bicycles. But Mobike’s financial statements showed no sign of profitability in the near future.

Between April 4 and April 30, Mobike generated 0.56 yuan of revenue per ride. A company needs to generate at least 1 yuan per ride just to break even, bike-sharing industry participants told Caixin.

Meanwhile, Meituan is struggling to make money on its other businesses. It lost 18.9 billion yuan in 2017 compared with a loss of 5.8 billion yuan in 2016. In the first four months of 2018, the company had an adjusted net loss of 2 billion yuan, reflecting cash spent on the Mobike acquisition, increased sales expenses and rising debts.

In its updated prospectus, Meituan said it would no longer pursue expansion of the car-hailing service it launched in February 2017 in Nanjing and expanded in March 2018 to Nanjing. The company had said in December that it planned to extend the service to seven cities, including Beijing, Shanghai and Hangzhou. The industry is crowded, making expansion expensive.

Caixin learned that Meituan obtained licenses for the car-hailing service in Hangzhou and Chengdu. But no further actions are expected.

Separately on Monday, Meituan spinoff Maoyan Weiying, China’s largest online movie-ticketing platform, filed its IPO prospectus with the Hong Kong Stock Exchange. The company didn’t disclose its IPO date or how much it plans. Tencent has also invested in Maoyan.

A previous version of this story misstated Mobike's revenue and gross loss. They were actually 147 million yuan ($21.5 million) and 407 million yuan, respectively.