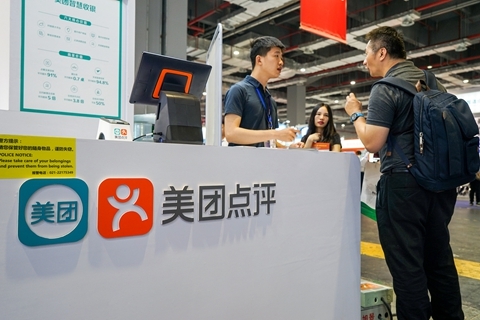 The company cleared pre-listing inquiries by the exchange, the sources said.

Meituan’s IPO is widely expected to be another Hong Kong blockbuster, raising at least $4 billion and putting the company’s value at $50 billion to $55 billion, according to the sources. Last month, Chinese smartphone-maker Xiaomi Corp. raised $4.7 billion in a Hong Kong IPO.

But it faces stepped-up competition from Alibaba Group Holding Ltd., which Thursday announced the combination of its food-delivery platform Ele.me and its local service unit Koubei with a $3 billion injection of fresh funds.

Meituan will begin a global roadshow Sept. 3 for its Hong Kong IPO, the sources said. The company was valued at $30 billion in its latest funding round in October, in which it raised $4 billion from investors led by Tencent.

Although it claims 310 million active users and a 60% share of the online food delivery market, Meituan has yet to turn a profit. In its IPO prospectus filed in June, Meituan disclosed a 19 billion yuan ($2.76 billion) loss for 2017, steeper than in the previous two years. But its adjusted net loss narrowed to 2.85 billion yuan from 5.34 billion yuan in the prior year.

The company said the adjusted net loss excluded the impact of fair value changes of convertible redeemable preferred shares and other items. Revenue more than doubled to 33.9 billion yuan from 13 billion yuan in 2016.