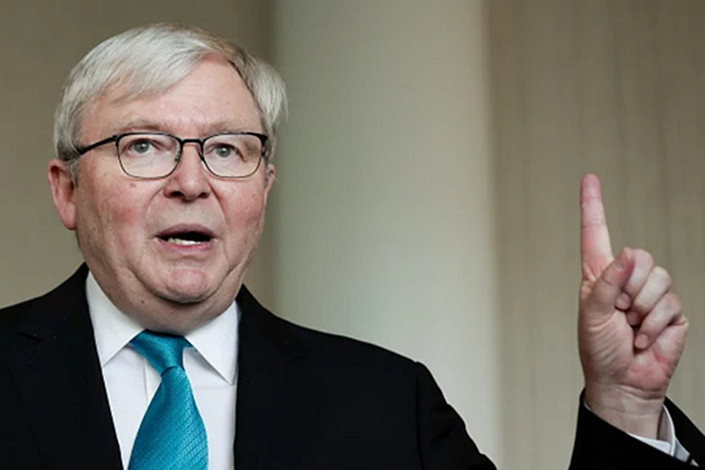 America’s policymakers, political elite and business community all now viewed Beijing as no longer a strategic partner but rather a strategic rival, he said.

Rudd said 2018 was a fundamental turning point in the history of the U.S.-China relationship and we are now in a period of disruption “without any real rules of the road,” where there is “a greater risk of crisis, conflict or even war.”

“The nature of this change is that the United States, after 40 years of strategic engagement with China ... has concluded that China is no longer a trustworthy strategic partner,” he writes in the introduction to a collection of speeches on the bilateral relationship released by the Asia Society.

Rudd predicts there will be some resolution to the U.S.-China trade war this year, but it will not deal with the “unfolding economic war in cyber, information technology domination, and global standard setting.”

He also expects both countries’ leaders to come under increasing pressure domestically — Donald Trump from the Russia investigation and Xi Jinping from a slowdown in the Chinese economy — resulting in more assertive foreign policy positions.

Over the next two years, the Trump administration “may double down on its foreign and security policy strategy toward China in order to demonstrate the toughness of U.S. presidential resolve in asserting and defending U.S. national security,” Rudd said.

At the same time, he expects “a more nationalist China” to emerge.

“Saber rattling against Taiwan may well intensify,” he said. “But, more critically in terms of the stability of the US-China relationship, freedom of navigation operations in the South China Sea are likely to become more confrontational. The accumulated risks, therefore, of collision between aircraft or naval craft are also likely to become greater. Crisis management between Beijing and Washington may be tested to the limits,” he said.

This unsettling outlook for power relations in 2019 follows China’s move away from market-based economic reforms and its more forceful foreign policy settings over the past few years.

Beijing built man-made islands in the South China Sea to assert its territorial interests and aggressively promoted its Belt and Road infrastructure initiative as a way of creating new trade routes and expanding Chinese influence.

China has also come under fire over allegations of cyber espionage, all of which prompted a consensus to form among U.S. policymakers that Beijing was now a strategic adversary.

Rudd said there is “a widespread feeling among U.S. elites that for many years now China has deceived the United States, and the United States has been utterly naive in its response, and that there is now an urgent requirement to adjust in response to an unadorned Chinese strategic realism before it’s too late.”

He said the change in 2018 was not just a product of the Donald Trump presidency, but that both Republicans and Democrats had formed a view that China was becoming less internationalist.

Rudd said North Korea is “the sleeper issue,” as Kim Jong Un is unlikely to make any substantive move toward nuclear disarmament without further U.S. concessions.