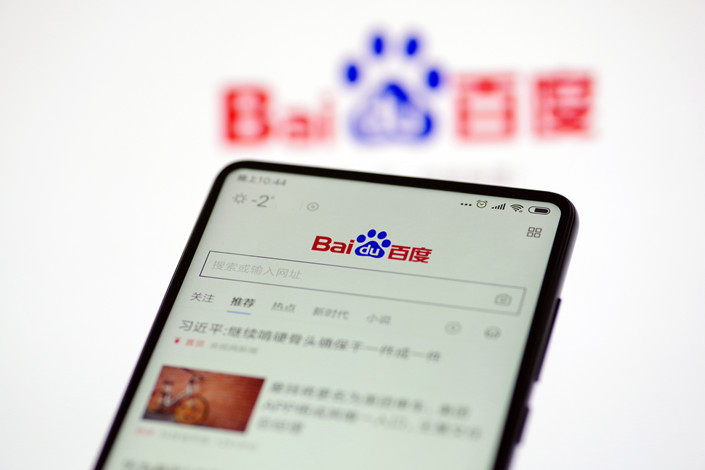 Baidu has responded to the criticism by defending Baijiahao, saying the service’s articles accounted for less than 10% of its total search results. But it also said it had listened and would work to improve the service. Photo: IC

* Baidu has long dominated search in China, as it has more than 70% of the market share

(Beijing) — Search giant Baidu Inc. is on the defensive after a viral article accused it of stacking its search results with pages hosted on a subsidiary platform.

The complaint was over the high search rankings of posts on Baidu’s Baijiahao service, a content platform for bloggers and established media. This lets poor quality content rise to the top of searches — as long as it’s hosted by Baidu.

The situation led ex-journalist Fang Kecheng to exclaim, “Baidu As a Search Engine Is Dead,” in a public post on WeChat Tuesday.

Fang said most of his Baidu searches now return Baijiahao content and Baidu’s other products.

“Baidu.com is no longer the place where you search for online content in Chinese, but an in-site search of its own content,” Fang said in the post, which has since gone viral, garnering more than 100,000 views — the maximum number publicly shown on the popular Tencent Holdings Ltd. platform.

On Wednesday, Baidu responded with a statement defending Baijiahao, saying that the service’s articles accounted for less than 10% of its total search results. But it said it had listened and would work to improve the service.

“The service can improve users’ experience, and problems such as slow loading sites and page layout,” it wrote on China’s Twitter-like microblogging platform Weibo.

With a diminishing number of international competitors permitted to operate in the country, Baidu has long dominated, enjoying more than 70% of the search market share. But it has struggled to innovate and meet the needs of mobile users, who are increasingly accessing the web through apps that bypass the search engine.

Launched in 2016, Baijiahao was seen as the company’s effort to match rivals like news aggregator Toutiao — owned by Beijing-based Bytedance Ltd. — and WeChat’s official accounts. Baidu said it has attracted about 1.9 million publishers posting news on its blog-style Baijiahao platform.

Fang said when he searched keywords such as “Brexit” and “U.S. government shutdown” — more than half of the first page of results were Baijiahao content.

The article also criticized Baidu’s business decisions. “Baidu no longer intends to be a good search engine. It only wants to be a marketing platform, as it tries to turn users searching for content into traffic that it can monetize for itself,” he wrote.

Analysts have voiced concern about the increasingly siloed nature of China’s internet. The country’s largest platforms — including Weibo, Toutiao and Baidu — don’t share content with each other.

The criticism comes after reports Google LLC was weighing a controversial return to the China market by building a filtered search engine for the country. The plan, however, was reportedly shelved after objections from employees and a public backlash.

Baidu has endured a number of scandals in recent years. In 2016, a college student named Wei Zexi died after the company’s search product led him to a costly and bogus experimental cancer treatment. Baidu has since undergone a restructuring to remove illegal medical advertisers from its platforms.