By Tanner Brown and Jason Tan 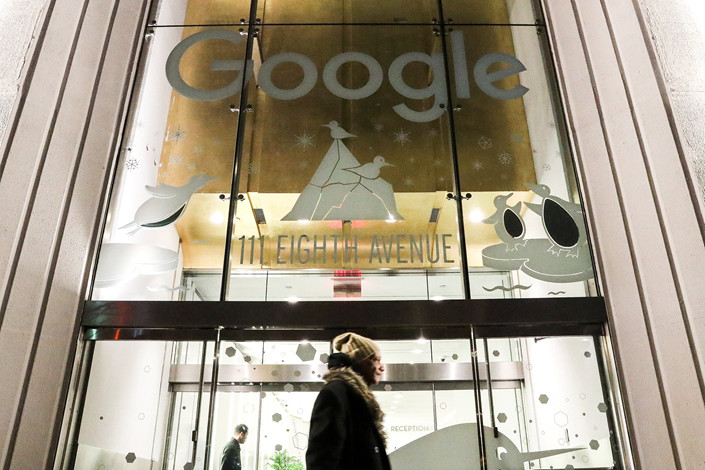 The headquarters of Google LLC is seen in the New York City borough of Manhattan on Monday. Photo: VCG

* Google CEO Sundar Pichai has told the U.S. Congress last week that “right now” the company had no plans to launch the search engine in China, though he declined to rule it out in the future

(Beijing) — Google LLC has shelved plans to develop a filtered search engine for China, after internal company disputes and objections from employees, The Intercept reported Tuesday.

Rumors of the company’s possible re-entry into China made headlines when they were first reported in August.

Google shuttered its China-based search engine in 2010 due to Beijing’s strict self-policing policies. But the talk of a possible return provoked backlash from employees, U.S. lawmakers, and rights group Amnesty International, as Beijing requires all internet sites in the country to police themselves and remove content deemed sensitive.

In November, over 300 people signed a Google employee petition demanding the project be dropped, saying, “We deserve to know what we’re building and we deserve a say in these significant decisions.”

The Intercept reported Tuesday that Google teams that had been working on the project — nicknamed Dragonfly — have now been given different assignments. Google had originally aimed to launch Dragonfly between January and April.

Word of the internal reshuffle echoes recent public comments from Google CEO Sundar Pichai, who told the U.S. Congress last week that “right now” the company had no plans to launch the search engine, though he declined to rule it out in the future.

Google first entered the China search market in 2006, but famously withdrew four years later after refusing to continue complying with Beijing’s strict laws for media self-policing Since then, however, the Chinese internet landscape has changed notably, and the country has consolidated its place as the world’s largest internet market.

Most importantly for Google, China has become the world’s largest smartphone market with around 100 million units sold each quarter. The vast majority of those are powered by Google’s open Android operating system, even though Google itself obtains few direct benefits since its own Pixel-brand smartphones and Google Play app store are unavailable in the country.

But the re-emergence of a China-based search engine would easily mark its biggest and most controversial move to date. Many Chinese have said they would welcome a return by Google to challenge current market leader Baidu, which has been accused of putting advertising income above users’ welfare and privacy.