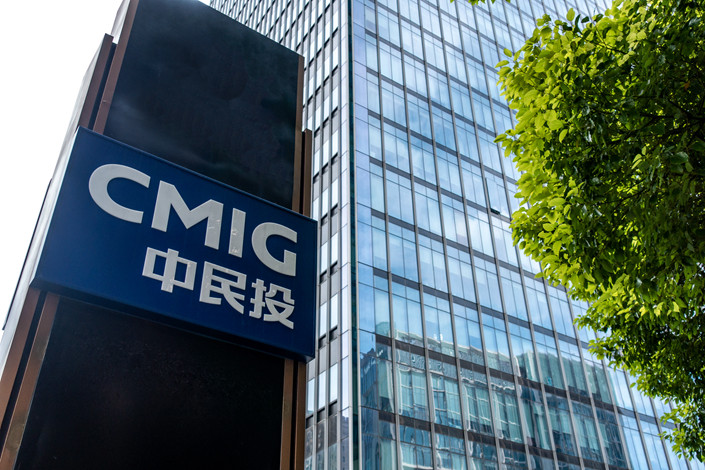 (Beijing) — A plunge in the bonds of China Minsheng Investment Group Corp. Ltd. (CMIG) on Wednesday sparked by default fears is the latest scare to hit the world’s second-largest debt market, as the government’s campaign to curb leverage exposes companies that overextended themselves in the good times.

CMIG, an investment group owned by 59 private Chinese companies, saw the price of a three-year 4.48 billion yuan ($659.4 million) bond traded on the Shanghai Stock Exchange plummet as much as 28.4% to 50.1 yuan. Although the bond, which matures in December 2020, recovered to 64 yuan on Thursday, that’s still significantly below the average trading price of 85 to 90 yuan over the past few months.

Trading in the bonds, which pay an interest rate of 7%, is usually thin — just a few hundred change hands each day. But volumes started to surge on Tuesday and continued into Wednesday, with more than 130,000 traded. The issue was underwritten by Huarong Securities Co. Ltd., the brokerage arm of state-owned bad-assets bank China Huarong Asset Management Co. Ltd. which is embroiled in scandal.

The sudden sell-off reflects mounting concerns that the company is facing a liquidity crisis. CMIG has been heavily dependent on short-term loans from banks and on bond issuance to grow its investment business. But that funding model has come under increasing pressure after regulators put the squeeze on the financial sector to control leverage and rein in risks, and CMIG is struggling to roll over its old debts.

The company received a quota of 10 billion yuan in outstanding super-short-term commercial paper, or those with maturities of under 270 days, in 2018, expressly to repay debt. CMIG noted in the prospectus of a 1.5 billion yuan short-term bond issued in July that two-thirds of the funds would be used to pay down a maturing bond, with the remainder repaying loans from financial institutions.

The slump in the exchange-traded bond on Wednesday could have been triggered by sales ordered by the risk management departments of some institutional holders, such as private-fund managers, an executive with the fixed-income department of a brokerage firm in a eastern region of China told Caixin. A private-fund manager in northern China attributed the slump to a delayed response by investors trading CMIG bonds on the Shanghai Stock Exchange to the increased risks surrounding the company. Other CMIG bonds traded on the interbank market didn’t see a large decline.

In a statement to Caixin late Thursday, CMIG said that the trading volume of the bond on Wednesday, amounting to 7.67 million yuan, only represented some 0.15% of the total principal. That suggests sales did not come from institutional investors, whose holdings usually amount to at least 50 million yuan, but from retail investors, who tend to trade on mood swings, the company said.

CMIG had total assets of more than 300 billion yuan and interest-bearing debts surpassing 170 billion yuan at the end of 2017, but its debts had surged to 232 billion by the end of September 2018. Sources have told Caixin that the company’s troubles have been compounded by a complicated web of internal investment departments, and large exposure to deals involving the private placement of shares in listed companies that have incurred heavy losses. To raise cash, CMIG tried to sell two high-quality land parcels in Shanghai, Caixin has learned.

The jury is still out on whether CMIG will default on the exchange-traded bond. “Although the bond price has dropped a lot, it’s still hard to say whether it will default or not at the end of the day,” a bond market source told Caixin. He said CMIG has some solid assets on its books such as financial assets, property, aircraft and solar power stations, and that its main problem is high costs — in management, manpower and fundraising.

CMIG has 16 outstanding bond issues — five listed on the Shanghai Stock Exchange, and 11 on the interbank market. Of the total, 12 are due to mature in 2019, according to data compiled by Caixin. One three-year bond has matured and been repaid, and CMIG will need to find 12.33 billion yuan to pay back the other 11.

The story has been updated with a response from CMIG about the drop in the bond price.