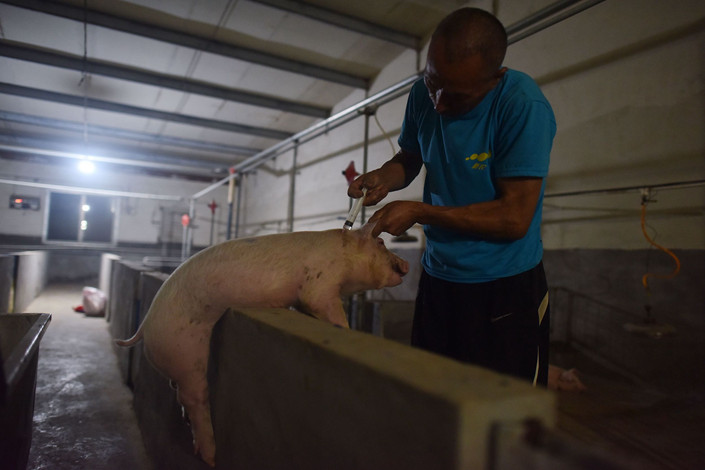 A pig is vaccinated on a farm in Henan province on Aug. 10, 2018. There is no vaccine for African swine fever. Photo: VCG

Two Chinese pig farms housing tens of thousands of animals have been blamed for mismanaging and attempting to conceal African swine fever cases.

The farms, located in Northeast China’s Heilongjiang province and East China’s Jiangsu province, failed to report African swine fever cases promptly and intentionally broke rules aimed at controlling the spread of the deadly disease, China’s Ministry of Agriculture and Rural Affairs said in a report published last week, which didn’t identify the owners of the farms. The Heilongjiang and Jiangsu farms were home to around 73,000 and 69,000 pigs respectively.

The ministry’s report comes amid a nationwide crisis that has seen more than 900,000 pigs culled in efforts to stop the spread of swine fever. The disease, first reported in Northeast China’s Liaoning province in August, has now been reported in dozens of provinces. African swine fever is deadly for pigs but is not known to affect humans.

Caixin has learned from local officials that the farm in Heilongjiang mentioned in the report belonged to Heilongjiang Asia Europe Animal Husbandry Co. Ltd. On Tuesday, Shenzhen-listed Fujian Aonong Biological Technology Group Incorporation Ltd. announced in a statement that the Jiangsu farm criticized by the ministry belongs to Jiangsu Jiahua Pig Breeding Co. Ltd., in which Aonong holds a 10% stake.

The first cases of African swine fever at the Heilongjiang farm were discovered between Nov. 23 and Dec. 5, after four piglets were found dead with enlarged spleens, investigators said. Tissue samples from the piglets tested positive for African swine fever. After this, more pigs at the farm died, and the company ordered more tests. But the outbreak was not reported to the authorities until Dec. 29, the ministry said.

Likewise, the Jiangsu farm knew that some of its pigs had African swine fever in early December, but failed to report the outbreak to local authorities for several days.

The ministry also found that both companies had deliberately broken quarantine rules, by selling pigs to brokers without first putting the animals in quarantine. The investigation is ongoing, the ministry said.