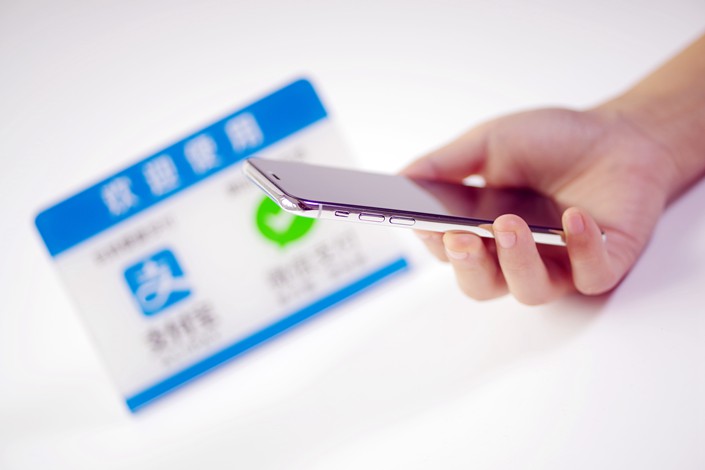 Third-party payment platforms now have 100% of their reserves of client funds in PBOC accounts. Photo: VCG

*Using commercial bank accounts had facilitated lucrative interest income, which for some operators made up as much as 80% of their profit

(Beijing) — China’s third-party payment firms have finally had the door shut on a lucrative business that allowed them to earn interest on the trillions of yuan they hold temporarily for customers buying goods and services online.

The companies, which include Tenpay and Alipay, the payment businesses operated by internet giants Tencent Holdings Ltd. and Alibaba Group Holdings Ltd. affiliate Ant Financial Services Group, have now shifted all of their customer deposits — mostly prepayments for goods and services — from their commercial bank partners to dedicated accounts at the People’s Bank of China (PBOC), the central bank.

The change is part of the government’s long-standing campaign to combat fraud and crack down on financial risk. It will give the central bank better oversight of the booming third-party payment system to make sure customers’ money isn’t misappropriated or used for illegal activities. It will also streamline the complex web of accounts payment providers set up with banks — Alipay and Tenpay each had accounts at more than 100 lenders, Caixin has learned from multiple sources in the industry.

China's third-party payment market has soared over the past few years in step with the boom in e-commerce and online shopping as it offers a quicker and more convenient way of paying for goods than traditional bank cards. In the third quarter of 2018, the transaction value of third-party online payments amounted to 65.4 trillion yuan ($9.7 trillion), according to data research firm Analysys, which estimated Alipay had the biggest market share at 23.5%, followed by Union Pay — China’s monopoly bank card payment processor — with 22.9% and Tenpay with 9.6%. For mobile payments, Alipay and Tenpay dominate the market with a share of 53.7% and 38.8% respectively.

The PBOC has been gradually raising the percentage of client deposits nonbank payment firms need to put in accounts at the central bank since it first ordered the requirement back in early 2017 when it set the rate at 20%. It subsequently raised the level to 50% effective April 2018 and in June increased the figure to 100% effective Jan. 14, 2019. But the PBOC doesn’t pay interest on the accounts.

As of the end of December, payment operators had deposited 1.63 trillion yuan ($240 billion) of clients’ reserve funds — 1.3 trillion yuan of which were from third-party payment firms — to the special accounts at the PBOC, Caixin has learned from several industry sources.

Keeping customers’ money in accounts with ordinary commercial banks was a lucrative business for payment providers as they earned interest on the funds and often deposited money overnight or short-term on the money markets to get higher rates. Interest income generated from client funds accounted for less than 10% of the total profits at Alipay and Tenpay, Caixin has learned from industry and regulatory sources.

But it formed a much bigger chunk of earnings at smaller operators who have been hit hard by the new regulations and will now have to fall back on their core business of signing up vendors to use their services, the sources said. For some companies, interest income made up as much as 80% of their profit, they said.

The central bank started licensing third-party payment providers, who process payments mostly from online shopping for goods and services, in May 2011, and the latest data show 238 companies with official approval.