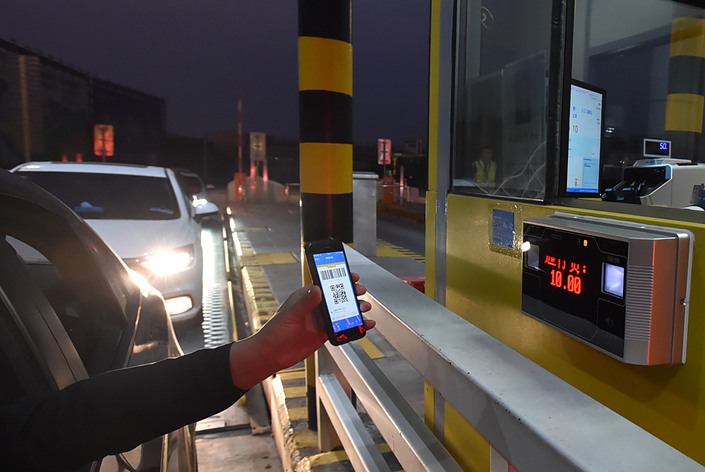 A motorist uses a cellphone to pay a toll at the Shugang toll station on the Suyang Expressway in Yangzhou, Jiangsu province, on Oct. 23. Photo: VCG

NetsUnion Clearing Corp.’ s platform — which serves as the sole intermediary for the clearing of nonbank online transactions — handled 1.17 billion transactions across financial institutions on the day of the Double 11 sales, according to its website. At its peak, it handled 92,000 transactions per second.

The online sales event, China’s biggest, served as a major test for the clearinghouse, which went live just last year to help regulators improve oversight of the country’s online payment market, the world’s largest. NetsUnion now handles over 90% of all the online payments across financial institutions, according to its website.

One of the goals of the clearinghouse is to end a longstanding practice in which transactions from different companies were handled under different terms with different banks — all falling outside the central bank’s oversight. The platform’s key mission is to create a level playing field for all payment operators by requiring them to follow the same standards and rules, NetsUnion CEO Dong Junfeng said last year.

Once the NetsUnion clearinghouse was up and running, payment companies and banks no longer had to make multiple arrangements for transactions with different partners, which helped them cut operating costs and reduce management risks.

However, the path to building the platform and getting payment operators to go through the clearinghouse was not altogether smooth. Given that Ant Financial’s Alipay and Tencent’s Tenpay — which operates the payment service for the popular messaging app WeChat — had already been handling a large number of payments through their own well-established platforms, many doubted whether the central bank had the technological capacity to build something above and beyond without compromising the user experience.

Some also held concerns about the profound changes such a clearinghouse would bring to the online payment market and would spark a reshuffle in the relationship between payment firms, banks and other market players, such as UnionPay, the country’s only interbank payment clearinghouse.

It was necessary, nonetheless, to introduce such online clearinghouse, Dong said. “A clear boundary will be drawn between online payments and clearing services, forcing payment firms to improve the compliance of their businesses and offer better protection to consumers,” Dong wrote in a commentary for Caixin last year. “It is a key step toward ensuring the healthy development of the payment markets and the security of the financial markets,” he wrote.

To process such an enormous number of transactions, the clearinghouse had to adopt a multicentered structure to ensure security. The platform is powered by six data processing and storage centers in three different locations, with each center capable of processing 20,000 to 30,000 transactions per second. The structure allows for greater data security in case of failure and ensures consistent operations, according to Dong.

To encourage payment platforms that were reluctant to join the effort, authorities offered them an incentive by allowing them to invest in NetsUnion, thus giving each participant a seat at the table. The central bank and the Payment & Clearing Association of China together hold a 37% stake in NetsUnion, while other online service providers own the remaining 63%. Alipay and Tenpay both own a 9.6% stake of the company, according to Tianyancha, an online business tracker. Other stakeholders include JD.com’s Chinabank Payments, Wanda Group’s 99bill, Baidu’s Baifubao, and Ping An Group’s 1Qianbao.

At first, the clearinghouse proposed a draft plan to build up the infrastructure by adopting Alipay’s and Tenpay’s two existing platforms and connecting them with the rest of the payment companies. The initial plan, however, immediately stirred controversy and was abandoned because many doubted the neutrality of the new clearinghouse. Critics were concerned that the two tech giants would have too much control over the platform and its data. “The most difficult part was coordination” because payment companies had very different attitudes toward the clearinghouse, Dong said.

One industry source said it was high time for the change. “Payment companies should earn their profits from their services, not from just sitting on their clients’ reserves and earning interest,” a source from the payment service industry said.