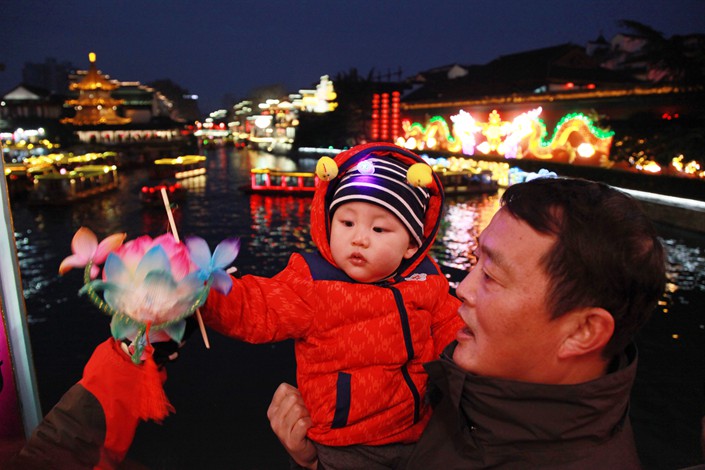 China registered 15.23 million births in 2018, 2 million fewer than 2017 and sharply lower than all government estimates.

The number, made public by the National Bureau of Statistics on Jan. 21, stood in stark contrast with estimates made by China's National Health and Family Planning Commission.

The commission had estimated that after China started relax birth control policies and to allow all couples to have a second child in late 2015, births in 2018 would range between 20.82 million and 22.94 million.

Absent the "comprehensive two-child policy," the commission had estimated 17.24 million births in 2018.

The comparison of actual numbers and all these estimates has shown that the Chinese government sharply overestimated.

On our part, these two writers have long warned of a serious crisis of low fertility, but it turns out even our estimates have been over-optimistic.

We had predicted a peak in new births in 2017, but that peak apparently arrived in 2016, with new births dropping ever since.

What can be expected now is that the number of newborns will continue to shrink rapidly in 2019 and beyond, despite a slowdown in the rate of decline.

The reduction of newborns will be visible in both second-child and first-child births.

Based on the plans of the Chinese population, only half of the mothers who have given birth to a first child will bear a second. Therefore, given that the age structure of women of childbearing age remains stable, second-child births should be significantly lower than first-child births.

However, in the statistics of new births in 2017, there were 22% more second-child births — at 8.83 million — than first-child births.

This could only be explained by observing that in 2017 there was what we call a "pile-up effect," meaning a lot of women, at or towards the end of childbearing age, rushed to give birth in a brief window of time when China recently allowed two children to all couples.

That window of time will be brief, so the pile-up effect is only temporary and not sustainable.

The Chinese government has not made public a breakdown of details of birth numbers in 2018, but we estimate that a significant portion of second-child births in 2018 come from the "pile-up effect." As that effect dwindles to an end, second-child births could fall by half compared with 2018.

Even as China abandons family-planning policies and changes toward significantly rewarding births, we estimate that third- and fourth-child births as a result of those rewards won't make up for the loss in second-child births.

In addition to the reduction of second-child births, first-child births will also drop rapidly due to two reasons. First, the number of women at the peak of their fertility will decrease by 40% in the next decade, translating to a drop of first-child births. Second, the rate of first child births remains low.

According to an age-specific fertility rate survey in 2016, 69 out 100 Chinese women had given birth. If that remains the case, it would mean that 31% of Chinese women born in the 1990s will not give birth in their lifetime.

However, we tend to believe that one of the reasons for the rapid decline in the fertility rate is the increasing average age at which women are giving birth to their first child. If this is the case, then China's fertility rate could rebound slightly in the future.

However, based on our analysis of the "pile-up effect," we forecast the number of births will shrink rapidly in a few years’ time and dip below 10 million around 2027 — a number lower than in the beginning of the 19th Century.

It can be said with certainty that even though 2018 saw a low number of births, that number will not be surpassed for the next 100 years. China will never see more than 15 million newborns in the future. On the contrary, the number will decline profoundly towards under 10 million a year.

From a global perspective, China's population shrinkage is very significant. If China drops all family planning restrictions but does nothing to encourage births, China's share of the world's population will decline rapidly.

Behind the decline in births is widespread unwillingness to have children, and one important reason for this is that parenting costs are too high. High parenting costs are severely inhibiting. For example, in a typical Chinese middle-class family, the average annual cost of raising a child is about 30,000 yuan ($4,400), so it costs more than 500,000 yuan to raise a child from birth to 18 years old.

In fact, this expensive parenting model and the lowering willingness are a vicious circle. In other words, the lower the fertility rate, the lower the average number of children in families, leading to higher parenting cost per child. Therefore, more families would not dare to have more children, which leads to lower fertility rates.

If invisible costs such as pricier housing and the time needed to care for a second child are counted, the total cost could exceed a million yuan in first- and second-tier cities, which is broadly in line with the cost of raising a child in a developed country.

However, white-collar wages in China's first- and second-tier cities are less than one-third of those in developed countries.

To effectively reduce the burden of raising children, it is necessary for the government to provide financial support. Options include tax deductions corresponding to the number of children in a family, or direct subsidies.

China's fertility rate has been lower than the replacement rate — the rate required to maintain a new generation being as populous as an older one — for over 27 years. In the future, the fertility rate will face further downward pressure.

Even if family planning is liberalized immediately, as long as births are not vigorously encouraged by policies, the number of births will continue to decline after a short rebound, and the population will age profoundly.

Excluding technological advancement, the scale of China's economy will continue to shrink, lowering the economies of scale. Ultimately, China will lose its advantage of maintaining a comprehensive collection of all industries, see a fall in per capita income and a decline in national strength.

At present, it's the norm for countries and regions with fertility rates below the replacement rate to encourage births. The rewards for childbearing, especially third or fourth children, allow parents to live a decent life. Maternity and parental leave in those scenarios could last a year and a half. Many jurisdictions pay special attention to the planning of child care facilities and services and ensure compulsory education for children.

With these policies, fertility rates in Western European countries and Russia rebounded only slightly in recent years, but so far there has not been a precedent for raising their fertility rates to the replacement rate.

China's current low fertility situation is far more serious than in those countries. Under the family-planning policies that have been implemented for so long, the understanding and awareness of giving birth in China is a far cry from what is needed. Consequently, China will face greater difficulties in encouraging births, and require more resources put into this aspect.

Liang Jianzhang is the chairman and co-founder of online travel giant Ctrip. He is also a professor of economics at Peking University’s Guanghua School of Management. Huang Wenzheng is visiting researcher at the Center for China & Globalization and founder of Population and Future website cnpop.org.