By Ling Huawei and Li Qing 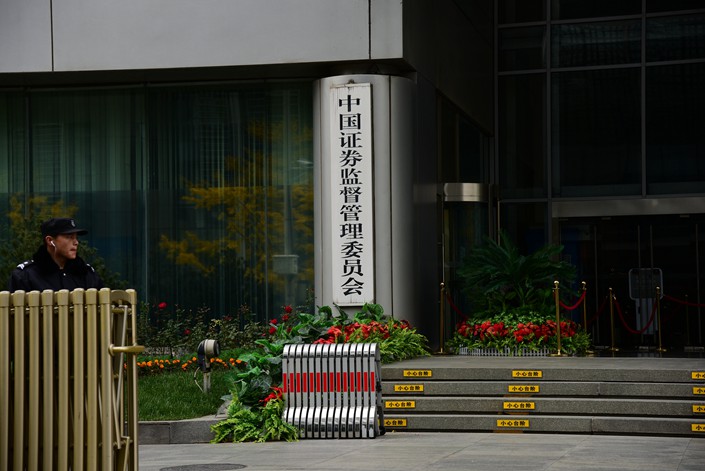 The Beijing headquarters of the China Securities Regulatory Commission is seen on Nov. 10. Photo: VCG

* Liu Shiyu reduced the waiting list of companies wishing to have initial public offerings, but he was reluctant to let the market, not regulators, determine which companies were worthy

* Liu insisted on tight rules on reverse takeovers and delisting, but when the market started to fall, the CSRC turned a blind eye to some fraudulent reverse-takeover cases

(Beijing) — China has appointed Yi Huiman, former chairman of the Industrial and Commercial Bank of China Ltd., as the new head of the China Securities Regulatory Commission (CSRC), replacing Liu Shiyu, who had been in the post for nearly three years.

Liu was named new head of the All-China Federation of Supply and Marketing Cooperatives, which manages supply and marketing for major agricultural goods nationwide and has extended its reach into finance. The organization is technically of the same administrative rank as the CSRC, but the wide gap between the two has still confused the market.

Members of the public, especially mom-and-pop investors, have long ridiculed, criticized, or even cursed the CSRC and its head, who oversees the country’s volatile stock market. This relative freedom of speech helps release investor emotions, but can’t directly contribute to a healthy securities market, which should be built on a well-designed system.

China’s securities market hasn’t lived up to public expectations for a long time. First of all, regulators have used administrative orders to intervene in the market whenever and wherever they want. They have controlled almost everything, including which companies can go public, what initial public offering (IPO) prices should be, and when trading can halt and resume. Second, insufficient regulation of, and punishments for, market fraud such as financial fraud, false disclosures and insider trading have made small and midsize investors especially vulnerable. Third, the CSRC itself sometimes failed to fulfill its duty or implemented overly strict regulations due to internal corruption and other factors. In addition, a lot of regulatory resources have been used for approval procedures, causing a shortage of resources for inspections.

Even for an unselfish CSRC chair who just aims to fulfill his duties, there are dangers everywhere. Any wrong move could cause irreversible damage to the market, and the chair would have to pay a heavy price. Some former CSRC chiefs were forced to leave the position because policymakers could not understand their efforts; some became puppets of their superiors and abandoned their own professional and independent judgment; and some lost their way while constantly trying to guess the intentions of the country’s top leadership.

At the very beginning of Liu’s term in 2016, he proposed that the priority of the CSRC was to regulate the market. In the following years, the CSRC released multiple new rules on regulating private placements and share reductions, and on tightening controls over reverse takeovers. The CSRC cracked more than 500 cases of wrongdoing during Liu’s term and issued over 22 billion yuan ($3.26 billion) in fines.

Liu paid special attention to the quality of the companies that wished to go public. He required companies, as well as securities underwriters and other intermediaries, to conduct rigorous self-inspections. He also asked companies to withdraw their IPO applications if they were substandard. With Liu’s efforts, the number of companies that were waiting for IPO approvals decreased to about 200 from nearly 900, while the wait for IPO approval for qualified companies was shortened to under a year from over three years.

To fix problems caused by a distorted pricing mechanism, Liu restored the delisting system and cracked down on reverse takeovers. But he was dubious about shifting to a registration-based IPO system from the current approval-based one. (Editor’s note: A “registration-based IPO system” refers to a system that requires less-active participation by regulators, instead emphasizing information disclosure. This is thought to be more market-oriented.)

He worried too much about the quality of listed companies, and was too afraid of the huge pressure that might be caused by fraud cases under a registration-based system. Liu chose to rely on administrative orders rather than market forces to differentiate good companies from bad. However, he might have forgotten that if regulators alone can select quality companies for small and midsize investors, there would be no need for the market or institutional investors. When President Xi Jinping in November announced a plan to set up a high-tech board in Shanghai and to pilot a registration-based system on the board, it was the first time that Liu, or anyone else, heard about it.

The complexity of the CSRC’s regulations means that its leaders should think ahead rather than just focus on the current situation. Former CSRC Chairman Guo Shuqing once said that the priority of regulating the securities market was to regulate information disclosure, while the rest should be decided by market forces.

Regulating information disclosure is only the first step. To fight market fraud, regulators should remain tough and consistent. During Liu’s term, he insisted on tight rules on reverse takeovers and delisting. But when the market started to fall, the CSRC turned a blind eye to some fraudulent reverse-takeover cases.

The aforementioned gains and losses laid the groundwork for the personnel reshuffle. For now, the stock market is sluggish and risk is high, providing a great opportunity for reform.

First of all, regulators need to ascertain the goal of regulation. The mid-to-long-term goal of regulation is to make the capital market the most effective means for direct financing, and through market mechanisms, to allow quality companies to become mainstream and obtain resources accordingly. Meanwhile, investors should be able to gain their dividend from economic growth.

Establishing a well-designed system is necessary to achieve that goal, but the assumption is that regulators will respect the market and refrain from intervening in pricing in the primary and secondary markets. This is why the central government wants to pilot a registration-based IPO system on the high-tech board. The priority of the regulators is to fight fraud, which can’t be done by market forces.

China’s securities market is still at the stage of establishing basic frameworks for market and legal systems. The head of the CSRC should clearly understand the relationship between the market and the government, and should understand and respect market principles. Not only should the head put aside personal gains and career plans, but they also should know the law and comprehend the market mechanism. When implementing the central government’s policies, the CSRC chief should be independent and professional, protecting the market mechanism as well as the interests of small and midsize investors. Top policymakers should also respect the chief’s professionalism and independence. If the entire government relies too much on the effectiveness of policies or being rescued by the “national team,” the securities market will be invalidated in the long run.