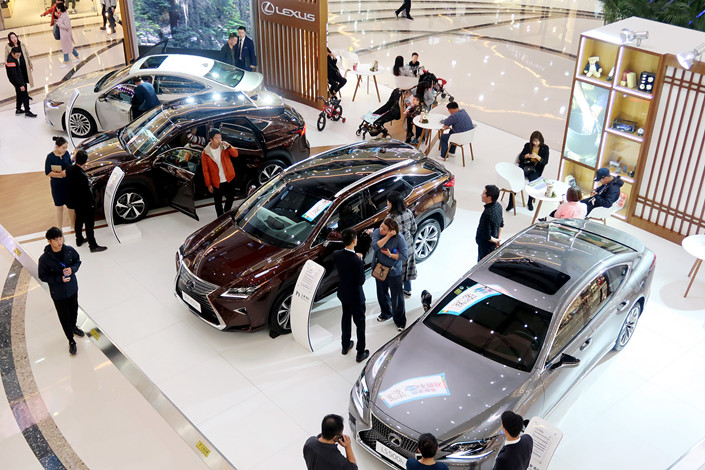 * Though key details about these measures are currently unclear, analysts say they are likely to be weaker than stimulus issued to prop up consumption in the wake of the global financial crisis

(Beijing) — China has released measures to support sales of products such as cars, 5G technology and home appliances, amid slowing economic growth and subdued external demand during a trade war with the U.S.

The country's massive auto market, which saw sales shrink for the first time in decades last year, was a key focus of the measures released Tuesday by the National Development and Reform Commission (NDRC), the state's top economic planning body.

Taxes on sales of second-hand cars will be reduced, purchases of new-energy vehicles will be subsidized, and rural residents in certain areas will be encouraged to exchange old cars for new ones. But without key details about the amount of subsidies on offer and which regions will qualify, analysts say the likely effect of the new policy is hard to judge. Such details will be decided later by central and local governments, the release said.

China’s car market is increasingly saturated, with car sales dropping 2.8% to 28.1 million units in 2018, the first annual decline in 28 years. The China Association of Automobile Manufacturers predicted the country’s total car sales this year would be roughly the same as in 2018.

“These measures are not simply to increase the volume of large cars sold; they're more about integrating the car industry's transformation with the upgrading of consumption,” said Liu Yunan, an NDRC official, at a news conference.

Wang Cun, an industry analyst with the China Automobile Dealers Association, said though the plan would improve the market environment for autos, it was unlikely to have a great effect on sales, but noted many of the implementation details had not yet been released.

The policies should increase the role of the car industry in promoting consumption, said Cui Dongshu, the secretary-general of the China Passenger Car Association, but further details are needed before it's clear how much effect they will have.

To fend off economic woes caused by the global financial crisis, policymakers unleashed a string of stimulus measures between 2009 and 2011, including massive subsidies to support automobile purchases in the countryside. China's car industry overtook that of the U.S. the year those subsidies began. Analysts said any similar stimulus to support the car industry in 2019 was likely to be far weaker.

The measures also promised faster issuance of commercial licences to build 5G networks — the next generation of wireless technology — as well as subsidies for buying “green” and “smart” home appliances, and more support for online shopping in rural areas.

5G technology will be tested commercially in several cities this year, Dong Dajian of the Ministry of Industry and Information Technology told a press conference. Dong did not say which cities.

This renewed emphasis on a domestic rollout of 5G comes as Chinese companies like Huawei Technologies Co. Ltd. face increasing suspicion abroad, with concerns in the U.S. and other countries that their equipment could be used for spying.

Stocks in the automobile and home appliance industries jumped earlier in January after Ning Jizhe, the NDRC's vice chairman, said the government was going to offer new policies to support consumer spending.