Do We Really Need to Be Worried About China’s Rail Network? 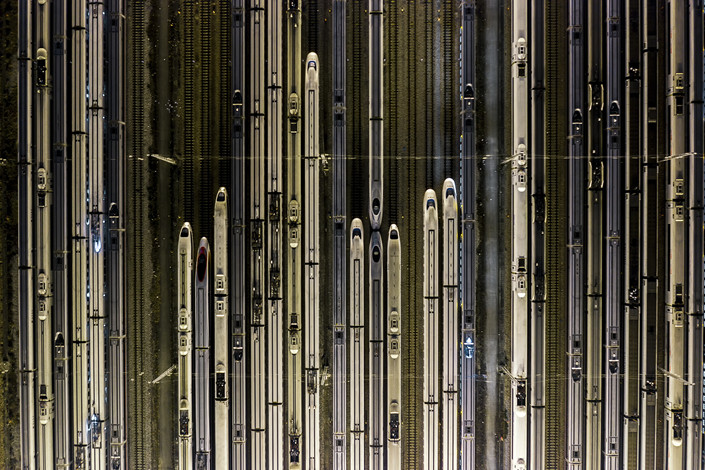 Through the end of 2018, there were 131,000 kilometers (81,400 miles) of railroad in operation across China, of which more than 29,000 kilometers were high-speed rail (HSR) tracks — the most in the world. The mileage built in China in just over 10 years is more than twice what has been built in the rest of the world in half a century.

But the “transport density” — the number of passengers moved per kilometer of railway per year — of the large-scale railway network is too low, indicating significant financial risk, Beijing Jiaotong University professor Zhao Jian wrote in Caixin this week.

Caixin spoke with other experts to explore Zhao’s position and to hear the other side.

According to Zhao, the large-scale construction of the HSR network has created a huge financial liability for China Railway Corp. (CRC) and China’s regional governments, and is one of the “gray rhinos” of the Chinese economy. Unlike so-called “black swan” events, which are largely unforeseen, a “gray rhino” is an obvious — but ignored — threat. CRC’s debt, Zhao found, has wildly outpaced the revenue from passengers, leaving the company heavily reliant on financial subsidies and more borrowing in order to repay its debts.

According to CRC’s third-quarter report, released on Oct. 31 and based on data through Sept. 30, the company’s debt had increased to 5.28 trillion yuan ($783.5 billion). CRC’s passenger revenue in 2018 was 340 billion yuan. This does not include local governments’ debts from investment into HSR construction — official data on which is not released.

A CRC employee, speaking anonymously as employees are not authorized to speak to the press, told Caixin that railway debts occur for many reasons. For example, CRC also runs a large number of slow trains in underdeveloped areas for public welfare, and they need subsidies of more than 4 billion yuan annually.

The CRC employee also said that more than just the HSR’s construction and transportation costs should be considered — the extensive network has been a boon for China’s industrialization and urbanization and has benefited cities along HSR lines. The investment is huge; has a long production chain; and integrates multiple technology fields, benefiting construction and related industries, and creating a large number of jobs.

Zuo Dajie, an associate professor at Southwest Jiaotong University’s School of Transportation and Logistics, said that the current high debt of the railway sector is due to the contradiction of needing to expand the scale of the rail network and the backwards ways of raising funds. He said the risk of railway debt lies in its large scale rather than in an excessive asset-to-liability ratio. If the railway debt can be resolved through reform in good time, it will not pose a substantial risk to the country’s financial system. However, if the current trend continues, the risks are obvious.

Zhao wrote that passenger revenue is able to cover only the construction and operation costs of HSR when there is enough passenger demand — those areas where the population is both large enough and dense enough. Therefore, the construction of HSR in China’s sparsely populated central and western regions will result in idle transport capacity. This is not conducive to the economic and social development in these areas.

A railway expert who wished to remain anonymous said that the railways that most need strengthening in central and western China are the branch railways, or capillaries. The so-called “feeder” lines serve small cities and even towns and have a top speed of 100 kilometers per hour. However, China is constantly reducing the number of trains on these feeder lines. With the rapid growth of railways over the last two decades, many small stations and feeder passenger services have been abolished, forcing passengers living in these regions to travel by road.

However, the CRC employee said that the less-developed economies of the central and western regions of China should not be a reason to halt HSR construction. In fact, such regions have been the focus of China’s railway investment in recent years. By the end of 2017, HSR lines in western and central regions reached 17,000 kilometers, accounting for 69.3% of HSR lines in the whole country.

Sichuan government officials told Caixin that western provinces need the HSR network to strengthen connections with central and eastern regions, but that the poorer western regions need more financial support from the state in order to cover the high costs of construction and operation.

Is the drop in the proportion of rail freight related to high-speed rail?

Zhao said that the large scale of HSR construction has led to a drop in the market share of freight moving by rail, which dropped from 50% in 2005 to only 17.1% in 2016. The amount of freight transported by other methods is increasing, with road transport rising to take 49% of the market in 2016. Thus, investment into HSR must be shared with investment into normal rail that can be used for freight.

But Zuo believes that the sharp decline in railway freight’s market share has nothing to do with large-scale HSR construction. In fact, HSR construction has played an important role in enhancing the competitiveness of railway freight transport. Now that passenger rail can operate on different lines from freight rail, the efficiency of both has improved, he said.

The proportion of railway freight transportation has dropped for a number of reasons, Zuo said. First, the speed of freight rail is too slow — freight trains must park to make way for passenger trains. In 2005, the average speed of a freight train was 32.1 kilometers per hour, rising to 35.6 kilometers per hour in 2014, which is still slower than road transportation. In addition, the reorganization of railway cargo at handling and technical stations takes a long time, further reducing the competitiveness of freight trains. Second, freight trucks allow for more flexibility in arrival and departure times and allows more direct door-to-door deliveries.

Everyone has differences when it comes to the scale, speed, and scope of HSR construction, but all sides can agree on one thing: The pace of market-oriented reform to the rail systems needs to increase.

Zuo believes that railway reform must be implemented quickly in order to maintain the sustainability of future HSR investment. He suggested that CRC should become a wholly state-owned company in order to streamline reforms, and that the three major railway transport companies should speed up their stock listings to encourage more regional capital investment into different modes of transportation.

In his article for Caixin, Zhao wrote that supply-side structural reform of transportation should be implemented to improve structural adaptability. Only by deepening the reform and remolding the main body of the market can the country stimulate the vitality of the market and enable the market to play a decisive role in the allocation of resources.