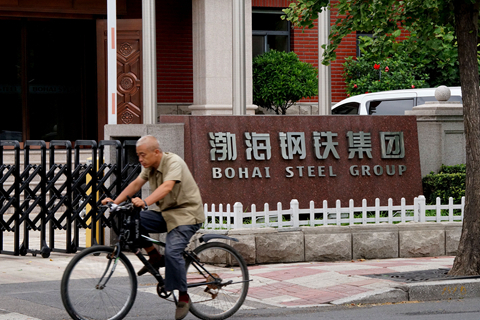 Debt-ridden Bohai Steel halted most of its production since 2016. Photo: VCG

Three years after a debt crisis crippled Bohai Steel Group, a reorganization plan is raising hopes of recovering some of the Tianjin government-owned company’s $36 billion in debts and reviving part of its business.

Representatives of Bohai Steel’s more than 100 creditors approved a bankruptcy and reorganization plan Wednesday, ending a long series of twists and turns since a creditors committee was formed in March 2016 to try to restructure the debt-ridden company.

The bankruptcy reorganization of Bohai Steel is China’s biggest-ever effort to rescue a financially crippled company. Under a court ruling in August, the reorganization would involve 48 companies under Bohai Steel’s umbrella, while 160 more subsidiaries would be liquidated.

By the end of April 2018, Bohai Steel and its subsidiaries had 243 billion yuan ($36 billion) of unpaid debts with only 115 billion yuan of total assets, Caixin has learned.

Bohai Steel’s bankruptcy administrators, led by Tianjin Vice Mayor Yao Laiying, outlined a 10-year plan to revamp Bohai Steel, including equity sales and debt-to-equity swaps, with a goal of listing the company on the stock market by 2023. Bohai Steel has struggled to meet debt obligations since 2015 following years of aggressive expansion and overcapacity.

Bohai had annual capacity of 22 million tons of steel products including bars and plates before it halted most of its production in April 2016.

Company document showed that as of Sept. 30 Delong Holdings had total assets of 11.9 billion yuan with 6.3 billion yuan of debt. The company’s revenue in the first three quarters of 2018 totaled 10.7 billion yuan. Net profit dropped 26% year-on-year to 1.3 billion yuan.

Bankruptcy administers said they expect that new investors will rejuvenate Bohai Steel’s main business and make it qualify for a public listing to allow more creditors to exit. Tangshan Delong has pledged to list Bohai Steel by 2023, creditors told Caixin.

“It is an exceptional arrangement without precedent,” said one creditor. But he added that there are still unresolved issues related to valuation and accounting issues.

Bohai has more than 100 creditors. They include the Bank of Beijing, Bank of Tianjin and Tianjin Binhai Rural Commercial Bank, each of which is owed more than 10 billion yuan, Caixin learned. Several major nationwide banks also hold toxic debt, including China Construction Bank, Bank of China and Industrial Bank.

China’s National Development and Reform Commission (NDRC) assessed Bohai Steel’s case and determined that the company is still worth a rescue despite its difficulties, Caixin learned from sources close to the NDRC.

With the reorganization plan in place, some said they are still skeptical about Bohai Steel’s future.

“Considering the massive assets and debt holes, the (reorganization) plan will be difficult to implement,” said one creditor of the company.

Other creditors expressed fears that without a management overhaul and better corporate governance, a new and revamped Bohai would only repeat the same mistakes that buried it in debt.