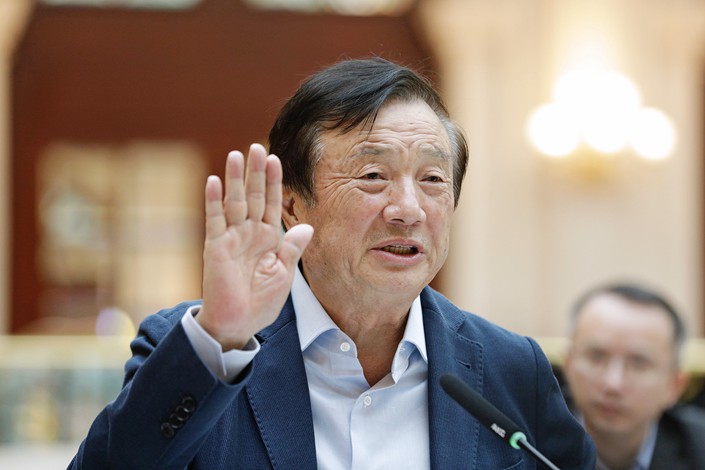 Editor’s note: The world’s largest telecom-gear maker Huawei has been facing its worst-ever crisis in recent weeks after the arrest of its chief financial officer, Meng Wanzhou, in Canada and U.S. attempts to push its allies to ban Huawei products in the name of security. Huawei founder Ren Zhengfei, who kept a low-profile before and after he had a rare interview with the BBC in 2015, met the media in mid-January to reiterate Huawei’s commitment to customer privacy and security. Ren has been widely respected in China as a courageous entrepreneur who created the company from scratch in 1987 and made it into the global firm, with more than $100 billion revenue expected in 2018. Caixin Global republishes the following story written by Caixin founder Hu Shuli in 2015 to give our readers a better understanding and insight into Ren.

(Beijing) — Ren Zhengfei’s straightforwardness impressed me when we first met years ago in Shenzhen. His sincere eyes and casual manner complement the business initiative that's framed his success as founder and CEO of Huawei.

I first encountered those eyes in December 2010 and heard Ren speak in heavily Guizhou province-accented Mandarin. He had agreed to give me an interview at Huawei's headquarters in Shenzhen. We talked for more than three hours during that interview. However, I could not publish anything then because it was all off-the-record.

At the time, Huawei employed about 110,000 people and had established branches in over 140 countries. Its reported annual revenue was $28 billion, making it the world's second-largest telecom-equipment manufacturer in terms of sales after Sweden's Ericsson.

When Ren left after the interview, his colleague invited us to have lunch together. I said to him “I have finally figured out why Ren has never done an interview, ‘cause he told me everything.”

That year, Ren was 65. I had since wondered whether I'd get a chance sometime to write about my time with him and share what I'd learned. Then five years passed.

On Jan. 22, 2015, I met Ren again in Davos, Switzerland, on the sidelines of the World Economic Forum. It was then that he granted his first on-the-record media interview as founder of Huawei since starting the company in 1987.

I was in the audience when Ren was interviewed by the British broadcaster BBC for a 45-minute TV news program. Ren didn’t look much different from five years earlier, though he seemed a bit nervous about his first on-camera live interview under the limelight of Davos.

The company had increased its workforce to about 160,000 since 2010 and expanded into other lines of business, such as smartphone manufacturing. A week prior to Davos, Meng Wanzhou, Huawei’s chief financial officer and Ren’s daughter, reported the company’s total sales had reached $46 billion, cementing its position as the world biggest telecommunications carrier.

Ren told the BBC that his story at Huawei was not as “fantastic” as others might imagine and said he had done it just to make a living at the beginning. Regarding rumors, such as Huawei bugging the U.S. government and being connected to the Chinese military, he said the products that Huawei made were too primitive to carry out these types of missions.

Later that day, Ren held a press conference with about a dozen Chinese reporters, including myself, where he discussed Huawei's management plan and business strategy layout.

On being asked about the shortcomings and edges of Huawei, Ren responded that “Huawei’s biggest edge is being dumb.” He attributed Huawei’s success to “people keeping on working hard no matter what the results might be,” adding this could be a good guide to the company. “To be frank, Forrest Gump is the most admirable person in the world,” he said.

Ren also broached the sensitive subject of power transition at Huawei by referring to the company's rotating CEO mechanism that has been running for years. He declared that he "has already transferred his duties" to a successor.

Regarding the rotation mechanism, Ren said “In fact, I don’t use my decision-making power now. I still keep my veto power, but I haven’t rejected anything yet.”

He did not reveal the name of his successor. But during our private encounter five years earlier, Ren denied speculation that he planned to hand the scepter to his son, Ren Ping, whom he thought was absolutely not fit for the role. Huawei executives told me at the time that Ren seldom got involved in personnel matters.

One article by Ren that has been widely circulated gave some hints about his family and his experience of childhood hardship in Guizhou.

Ren was born in 1944 where his parents worked as rural school teachers in the southwest of Guizhou. He spent years there finishing his primary and middle school studies until the family moved to a larger city where he attended high school.

He said that his adolescence was restricted by having little knowledge about the outside world, a “spiritual loneliness” as he put it. “Compared to kids growing up in the city, we know so little about the world,” he added.

“But my family was considered somehow rich ‘cause we added salt to our food. This is somehow considered as being rich there,” he said.

This explains why, during his entire life, Ren was endeavoring to climb over the limits that fate imposed on him. He bought textbooks and taught himself electronics during the chaos of the Cultural Revolution when youngsters in political groups scrambled to fight each other. During a stint in the People's Liberation Army, he worked as an engineer. He left the military in 1983 and started Huawei four years later.

To get the business off the ground, Ren said, Huawei followed the "guidance" of "successful products made by Western companies." Today, the company is going a step further by moving toward Western standards of openness.

"We are now learning from the West about management strategies, and trying to change ourselves," he said, adding that such learning was still the key at Huawei.

At our first meeting, Ren said he chose not to speak with the media because he feared sending wrong messages that could have a negative impact on the company. At Davos, when asked why he kept the media at arm's length, Ren said he avoided getting too much exposure, not because he was trying to be mysterious, but "simply because I lack the ability. I have little understanding of technology, finance and management."

But Ren later changed his mind. And at Davos he stepped out and stood in front of cameras to give the public a clear look at the man behind Huawei. "Whenever people can't see" what's going on "there will be more speculation," he said. “We are not so much better than others, we are just more industrious, we need to fight even harder than other people because we started so late.”

Complementing Ren's new openness is a new advertising campaign for the company that features an image of a ballerina's feet. One foot looks beautiful in a satin-pointed dancing shoe. The other is shoeless, bare, with battered toes. Ren said the advertisement symbolizes Huawei's spirit, pain and pleasure.

Hu Shuli is founder and publisher of Caixin Media and chairwoman of Caixin Global.