By Han Wei and Yang Ge 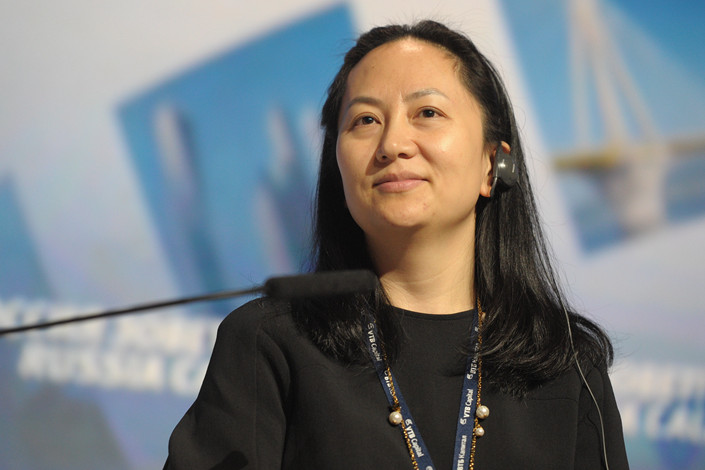 * Huawei’s chief financial officer, Meng Wanzhou, was taken into custody at a Canadian airport and is being sought for extradition to the U.S., though it is unclear if her detention is related to her position at the telecom equipment-maker

*If the U.S. investigation is targeted at Huawei, it would mark the latest setback for one of China’s biggest high-tech success stories. Its 5G networking equipment has been banned from countries including the U.S., Australia and New Zealand due to national security concerns

(Beijing) — The chief financial officer of Chinese telecom equipment-maker Huawei Technologies has been arrested in Canada and is being sought for extradition to the U.S., the company said on Thursday, as local media reported she had violated U.S. trade sanctions against Iran.

Meng Wanzhou, Huawei’s chief financial officer and the daughter of founder Ren Zhengfei, was taken into custody while transiting at an unspecified airport in Canada, the company said in a statement on its website.

The arrest comes at a sensitive time for U.S.-China relations, as the pair attempt to reach a trade deal before a March deadline set by U.S. President Donald Trump to avert new punitive tariffs in their ongoing trade war. It also marks the latest in a growing series of U.S. actions against Chinese high-tech firms, many of those aimed at curbing those companies’ access to American technology.

“Huawei has little information about the accusation against Meng and is not aware of any misconduct involving her,” Guo Ping, deputy and rotating chairman of Huawei, wrote on his WeChat social media account. He added that Huawei complies with “all laws and regulations where it operates, including export control and sanction laws and regulations of the UN, U.S. and EU."

He said Meng is facing unidentified accusations from the U.S. District Court for the Eastern District of New York.

Canada’s Justice Department confirmed to Caixin that Meng, who is also a vice chair on Huawei’s board, was arrested on Dec. 1 in Vancouver. She was being sought for extradition to the United States, and a bail hearing has been set for Friday, the department said in an email.

“As there is a publication ban in effect, we cannot provide any further detail at this time. The ban was sought by Ms. Meng,” the department added.

It was not immediately clear if the New York court order was seeking Meng’s arrest in relation to her position at Huawei. Meng previously served as a board member of Skycom Tech Co. Ltd., a company that allegedly offered to sell equipment from U.S. computing giant HP to Iran in 2010 in violation of American sanctions at the time, according to a Reuters report in 2013. The report said Huawei had described Skycom as one of its “major local partners.”

The Chinese embassy in Canada issued a statement opposing the arrest of “a Chinese citizen not violating any American or Canadian law” and calling for Meng’s release.

“The Chinese side has lodged stern representations with the U.S. and Canadian side, and urged them to immediately correct the wrongdoing and restore the personal freedom of Ms. Meng Wanzhou,” it said. “We will closely follow the development of the issue and take all measures to resolutely protect the legitimate rights and interests of Chinese citizens.”

Shenzhen-based Huawei is the latest Chinese tech firm to be targeted for allegedly violating U.S. sanctions. Earlier this year, Huawei’s hometown rival ZTE Corp. was slapped with a ban on buying U.S.-made equipment over similar accusations. Although the ban was later lifted, it forced ZTE to halt its main business operations for several months. The company’s stock has yet to recover, and its Hong Kong shares are still down nearly 40% from where they traded before the crisis broke out in April.

Huawei has been the subject of a criminal investigation for some time, as evidenced by the issuance of a subpoena more than a year ago that included a demand for information on responsible individuals, said Lester Ross, a Beijing-based lawyer from the U.S. He added that the relevant law includes possible criminal liability for such individuals.

“The Office of the U.S. Attorney for the Eastern District of New York plays a major role in trade sanctions cases because of the prominence of international commerce and of Kennedy Airport and other ports within its jurisdiction,” he said, explaining why the case may have been filed the way it was.

Meng, 46, was elected to Huawei’s board and named its chief financial officer in 2011. She was appointed vice chairman of the company in March.

If the U.S. investigation is targeted at Huawei, it would mark the latest setback for one of China’s biggest high-tech success stories. The company’s cutting-edge 5G networking equipment has been banned from a growing list of countries including the U.S., Australia and New Zealand over concerns of potential links between Huawei and Beijing — something the company denies. In the latest setback, British giant BT Group PLC said this week it was removing Huawei equipment from the core of a mobile network it acquired two years ago, and would use a similar approach for the 5G network it is now building.