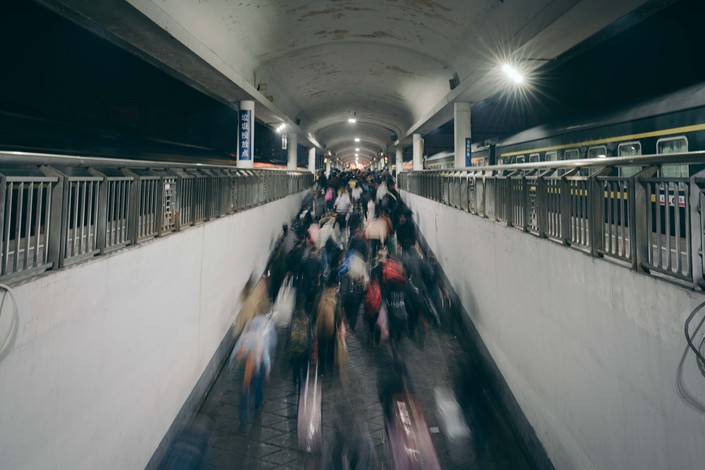 Tens of thousands of people travelled through Guangzhou Railway Station on Jan. 22, as migrants from around the country travel from the country's cities back to their rural hometowns for the upcoming Lunar New Year. Photo: VCG

Serious reform of China’s so-called “hukou” system for housing registration was called for in a new government report released this week, which examined the integration of the migrant population into 50 major cities.

“The social integration of the floating population has made positive progress, but there is still a big gap from the ideal level,” said Xiao Zihua, director of the National Health Commission’s Migrant Population Service Center, at a seminar releasing the report.

China’s “floating population,” or people whose place of residence does not match their hukou, currently accounts for about 18% of the total population, or about one in six people, according to the National Bureau of Statistics.

Restricted by their hukou, migrants are unable to enjoy equal treatment with registered city residents in accessing education, social security, and health care.

Less than 4% of migrants in the 50 cities included in the report, including Qingdao, Xiamen, Wuxi, Chengdu and Changsha, were able to obtain permanent residence in their adopted city, the report found.

While the report mentions major cities Beijing, Shanghai, Guangzhou, and Shenzhen, it did not evaluate the integration levels of migrants in these cities.

“Settlement difficulties” are cited as the first barrier for migrants’ integration into a new city, including rising housing prices and job insecurity. Of the migrants in the cities examined in the reports, 73.19% rent housing and 10.76% have purchased commercial housing. The report found that urban migrants spend between 26% and 28% of their income on housing on average.

The report noted that 64.7% of the floating population was born after 1980. Most of them intend to live in the city in which they currently reside, and have done for a long time, and have a strong desire to integrate into it.

However, in order to help them do so, there must be serious reforms to the hukou system, the report said. The household registration system is the crux of the urban-rural divide, it noted. But because each city experiences a different scale of population flow, it is difficult for centralized reform to fix problems in individual cities.

In July 2014, the State Council called for liberalization of restrictions on settlements of new migrants in medium- and large-sized cities while imposing strict control on population sizes of mega-cities, such as Beijing.

“The larger the city, the more difficult it is for migrants to integrate,” Xiao said. “Migrants most want to integrate into big cities and mega-cities, but our urbanization strategy is at odds with that as we encourage them to move to small and medium cities.”

The report found that economically developed cities along China’s southeastern coast, along with Beijing, Shanghai, Guangzhou, and Shenzhen, are the most attractive to the floating population because they offer the most in terms of employment opportunities and public services.

However, Beijing and Shanghai have tightened restrictions on non-resident populations and the number of migrants in these cities have declined.

It is China’s first annual report evaluating the social integration of the floating population. No reason was given for Beijing, Shanghai, Guangzhou and Shenzhen’s exclusion from the study.