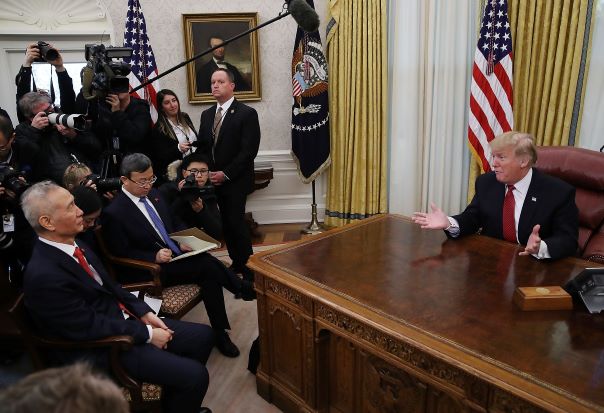 U.S. President Donald Trump prides himself on being a dealmaker. But even the famously immodest former real estate mogul may not have believed his ears on Thursday, when Vice Premier Liu He seemed to say that China would buy 5 million metric tons of soybeans per day from American farmers, in what would be the ultimate Spring Festival gift.

Or at least this is what was said according to the White House’s official transcript of yesterday’s high-level trade talks in Washington. While China is the world’s biggest consumer of soybeans, importing 88 million of them last year, Chinese citizens would need to start eating a lot more tofu, and China’s pigs would need to eat a lot more soymeal feed, to get through the 1.825 billion tons of soybeans they would be importing from the U.S. yearly if that figure was accurate.

Global Times editor Hu Xijin saw the funny side of the gaffe. “If China has to import 1.8 billion tons of soybeans from the US each year, it'll mean each Chinese person will get 1 ton, or 1,000 kg, they will be stuffed to death,” he commented. “Even the White House lawn will have to be converted to a soybean field, but it still won’t be enough.”

Except, of course, “per day” was likely “today.” The Wall Street Journal and the Global Times reported that White House officials had clarified that five million beans would be bought at an unspecified time, while China’s official Xinhua News Agency simply said that the two sides had agreed that China would import more agricultural products from the U.S. Bean counters at the customs bureau must have breathed a sigh of relief.

The negotiations were the highest-level meeting since Trump sat down with Chinese President Xi Jinping Dec. 1 in Argentina and declared a 90-day truce to negotiate an end to the trade war.

Both sides were clear in their optimism over the talks, with both sides having agreed to a “time schedule and route map” for future trade talks, Xinhua reported without nominating specific dates.