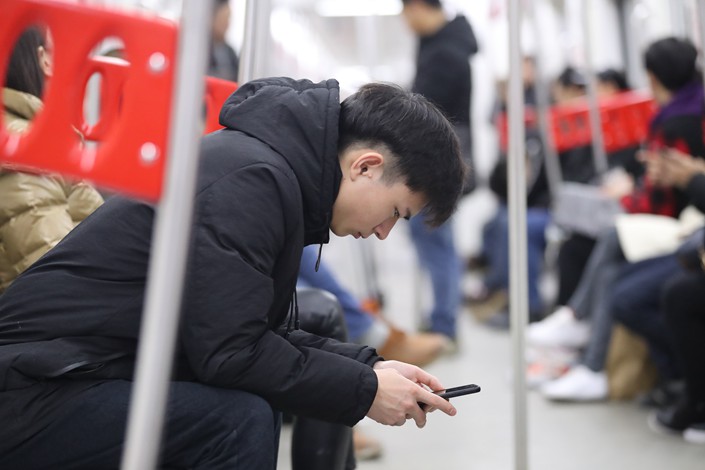 Passengers on the Chongqing subway use their mobile phones on Dec. 27. Photo: IC

The weak performances came as the overall China smartphone market continued to contract in last year’s fourth quarter, falling 9.7% as 103.3 million units shipped, according to data-tracking firm IDC (link in Chinese). The China market declined 10.5% for all of last year and has now notched five consecutive quarterly contractions, reversing several years of explosive growth that catapulted it to become the world’s largest market.

The correction has already claimed several second-tier brands, most notably the bankrupt Gionee and a struggling Smartisan. But even top names like Apple and the homegrown Xiaomi are starting to feel the pinch, especially as they battle against a surging Huawei Technologies that has quickly grown to dominate its home market and become the No. 2 player globally.

Apple’s China shipments tumbled 19.9% during the quarter to 11.8 million units, enough to claim the title of fourth-biggest player in the market with an 11.5% share, IDC said. Apple shocked the world early last month when it unexpectedly cut its sales forecast for last year’s final quarter, blaming China as one of the main reasons for the miss. The company later reported a 27% drop in Greater China revenue across all its products for the quarter.

Xiaomi’s China shipments plunged an even steeper 34.9% in last year’s fourth quarter, as the brand’s earlier comeback continued to fizzle at home due to stiff competition. The loss marked the second consecutive quarterly drop for Xiaomi, accelerating from a 10.9% decline in last year’s third quarter.

At the other end of the spectrum, the surging Huawei saw its fourth-quarter sales rise 23.3% to 30 million units, giving it 29% of the market. Homegrown players Oppo and Vivo rounded out the top five in second and third places, respectively, with each posting modest sales growth in the 1% to 3% range.

“Among the top five vendors, Huawei was the biggest winner in the domestic market in the fourth quarter, strengthening its grip through superior technology and a continuous driving of brand potential by its flagship model,” IDC said. “An ever-growing imbalance between the domestic market and high unit prices has led to a continued decline for Apple.”