By Timmy Shen and Chen Mengfan 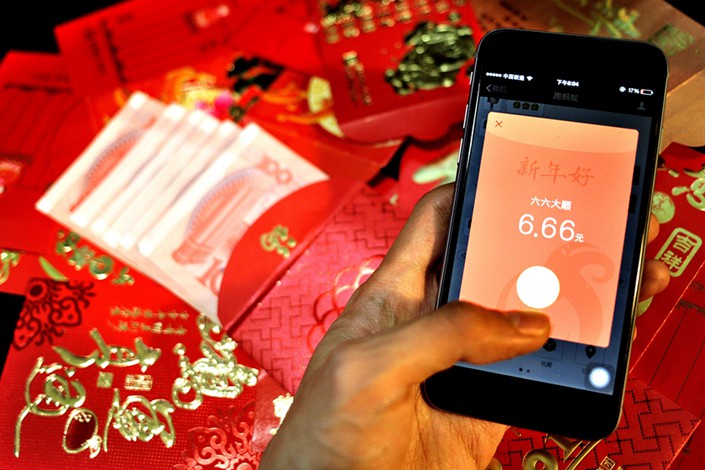 Internet and technology giants have once again handed out enormous amounts of cash in the form of virtual red envelopes, or “hongbao,” during the weeklong Lunar New Year holiday.

Following the Chinese tradition of young people receiving red envelopes stuffed with cash from their elders, China’s internet giants have in recent years seized the opportunity to boost traffic and gain new users — and their valuable personal data.

The country’s dominant search engine Baidu Inc. handed out 1 billion yuan ($148 million) in virtual red envelopes throughout the holiday, which is also known as Spring Festival. Most of it was given away during state broadcaster CCTV’s Spring Festival Gala, an annual variety show watched by about a billion people. Baidu sponsored the show and the hosts repeatedly urged viewers to get some lucky money through the Baidu app.

The huge sum of subsidies did bring in traffic. Baidu said its mobile app had around 300 million active users during the gala. However the cash had a few strings attached. In order to withdraw the money, users had to provide personal information and link their bank cards to Baidu’s financial arm, Du Xiaoman Financial.

In addition to the established platforms, short-video up-and-comers also joined the red-envelope frenzy this year.

TikTok, a short-video app under Bytedance Ltd., offered a total of 500 million yuan to users who completed tasks such as linking their mobile phone’s numbers or contacts with the app.

Tencent’s short-video app Weishi also shared 500 million yuan. Users could win cash by watching a certain number of clips or making their own interactive “hongbao” videos that allowed users to send money to friends through its WeChat Pay payment service.

In total, 823 million users of instant messaging platform WeChat sent or received red envelopes from Feb. 4 to Feb. 9, a 7.12% increase year-on-year, according to a statement from the company.