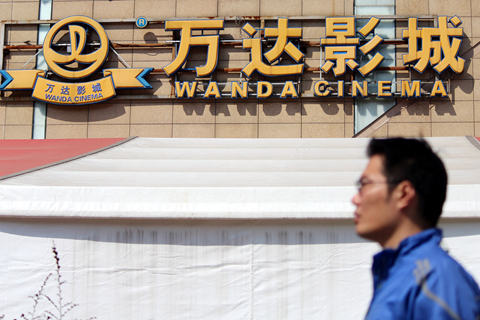 A state-owned minority shareholder dropped out of Chinese conglomerate Dalian Wanda Group’s plans to consolidate its film and entertainment businesses, forcing Wanda to scale back the transaction by almost 10% to $1.55 billion.

Wanda Film Holding Co. Ltd., the conglomerate’s cinema chain, said in a statement Monday that a state-owned shareholder of the film studio Wanda Media would no longer participate in the asset-restructuring plan. The state-owned enterprise is based in the coastal city Qingdao.

Under the modified deal, Wanda Film will acquire 95.7683% of Wanda Media from shareholders for 10.5 billion yuan ($1.55 billion), down from 96.83% for 11.6 billion yuan under its previously proposed deal announced last June. In addition, the transaction will be solely for stock rather than cash and shares as originally proposed.

Wanda Film said Qingdao West Coast dropped out of the restructuring plan because it failed to obtain approval from its state-owned assets supervisor. Qingdao West had opposed a capital reduction proposal by Wanda Media in August 2017, which would lower the company’s valuation to 12 billion yuan from 16 billion yuan. Eventually, the Wanda proposal was approved with support of other shareholders.

The deal aims to consolidate the group’s cinema operations and content production under one roof. But California-based Legendary Entertainment — which Wanda Group acquired in early 2016 — was not included in the deal.

The Shenzhen-listed company also said the underlying assets of Wanda Media are of high quality with relatively stable earnings and the deal would guarantee the interests of the listed company and its investors.

As part of the deal, Wanda Media promised a net profit of no less than 673 million yuan in 2018. In the revised restructuring proposal, Wanda Film said Wanda Media’s 2018 unaudited profit is expected to be no less than the promised level, thanks to higher-than-expected box office revenues of “Detective Chinatown 2.”

But Wanda Film expects Wanda Media’s box office revenue growth to cool in 2019, partly because the studio would participate in only one blockbuster movie this year, and most of the other movies would be smaller productions.