By Bai Jinlei and Han Wei 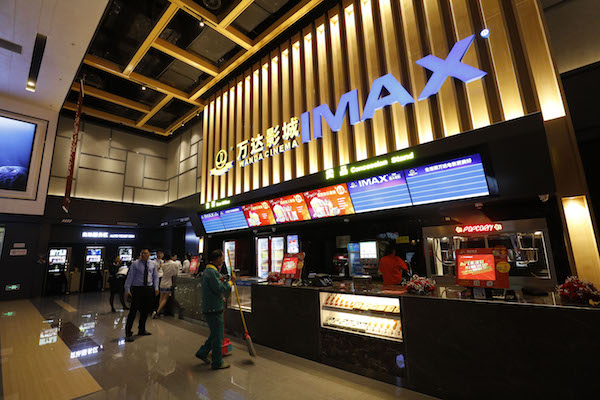 Wanda Film is China’s largest cinema chain operator, with 516 theaters and 4,571 screens and control of 14% of the country’s box-office. Photo: Visual Chin

The transaction involves 150 million shares—or a 12.77% stake—of Wanda Film Holding Co., according to a late Monday filing by the company. Hangzhou Zhenxi Investment Management Co., a subsidiary of Alibaba, will acquire a 7.66% stake for 4.68 billion yuan, while CIH is taking 5.11% at 3.12 billion, according to the statement.

Alibaba and CIH agreed to pay 51.96 yuan per share. That is close to the 52.04 yuan closing price when Wanda Film suspended its trading in July, after the company’s shares were hit by a selloff and plunged nearly 10% due to speculation that banks were tightening credit control on its parent. The shares have been suspended since then, with the company citing plans to restructure assets.

After the transaction, Alibaba and CIH will become the second and third largest shareholders of Wanda Film. Wanda Group remains the controlling shareholder, with a 48.09% stake, the statement said.

China is the second-largest film market in the world in terms of box-office sales.

Wanda Film is China’s largest cinema chain operator, with 516 theaters and 4,571 screens and control of 14% of the country’s box-office by the end of 2017. The company reported 13.2 billion yuan in revenue last year. Its business covers cinema operation, film distribution and advertising, online ticket sales and online games.

Caixin couldn’t reach Wanda Film for comment. Alibaba told Caixin that the investment will lay the groundwork for further cooperation between Alibaba and Wanda Film in entertainment and film businesses.

The deal marks Alibaba’s latest foray into the film market, as the company seeks to expand its footprint in the cultural and entertainment sector. Hong Kong-listed Alibaba Picture Group, which produces and distributes films, in 2016 took a minority equity stake in Amblin Partners, a Hollywood studio backed by Steven Spielberg.

After bringing in strategic investors, Wanda Commercial will cease developing property and instead focus on commercial management, the company said.

The stake sales came as Wanda Group steps up efforts to offload assets after its billionaire chairman, Wang Jianlin, vowed to transform the company into an “asset-light” business and reduce the company’s debt overhang that followed years of massive spending.

Wanda was one of China’s most aggressive overseas dealmakers, spending around $20 billion on foreign assets over the past five years. It bought film producer Legendary, theater chains AMC Entertainment Holdings, Odeon & UCI Cinemas, and a U.K. luxury yacht maker.

But the company, along with several other dealmakers, including HNA Group and Fosun International Ltd., came under closer scrutiny last summer as regulators tightened their grip on companies’ spending over concerns about capital flight and buildup of corporate debt.

Wanda Group has pared back investments and accelerated capital recovery to ease debt pressures. In recent months, it has announced sales of its assets in Australia, London and Los Angeles. Last year, the company sold $9.4 billion worth of hotel and tourism assets to domestic rivals in deals that helped Wanda Group reduce 44 billion yuan in debts while gaining 67 billion yuan in cash, according to Wang.

Last month, Wang said Wanda Group will return to growth this year. The company set a goal to increase revenue by 9% this year to 247.9 billion yuan. Wang affirmed the company will gradually repay all of its overseas debt and will not default on any loans.