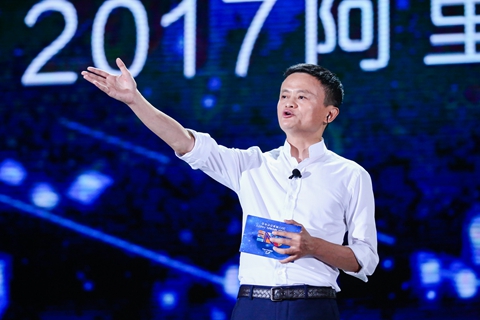 Ant Financial was set up after Jack Ma (above) spun off Alipay from Alibaba in 2011. Photo: Alibaba

Alibaba Group Holding on Thursday announced a purchase of 33% stake in fintech affiliate Ant Financial Services Group, as the e-commerce giant reported one of its strongest quarterly revenue growths.

Alibaba said it will acquire newly-issued shares from Ant Financial in exchange for certain intellectual property rights. The deal is pursuant to a 2014 agreement and will end a profit-sharing arrangement between Alibaba and Ant Financial, under which Ant Financial pays royalty and tech service fees to Alibaba that equal 37.5% of Ant Financial's pre-tax profits, or nearly $300 million last fiscal year, according to Alibaba’s statement.

There will be no cash impact to Alibaba following completion of the transaction, the company said. Alibaba will acquire the equity interest in Ant Financial through a domestic subsidiary, the statement said.

Ant Financial operates China’s largest online payment service Alipay, which has more than 520 million active users. In 2017, the service handled 1.5 billion payment transactions, an increase of 41% from the previous year. The company also provides a wide range of financial services such as loans, wealth management and insurance products.

In its most recent funding round to raise $4.5 billion in April 2016, Ant Financial was valued at more than $60 billion. The company is expected to be the next blockbuster listing of Chinese tech firm, although Ant Financial hasn’t given a timetable for the planned initial public offering.

“This transaction is a significant step for Alibaba to enhance our long-term strategic relationship with Ant Financial as we continue to pursue our mission to make it easy to do business anywhere,” Daniel Zhang, chief executive officer of Alibaba, said in the statement.

“An equity stake in Ant Financial enables Alibaba and our shareholders to participate in the future growth of the financial technology sector, as well as the benefits of user growth and improved customer experience,” Zhang said.

Ant Financial was set up after founder Jack Ma spun off Alipay from Alibaba in 2011 to avoid regulatory restrictions on granting third-party payment licenses to foreign-funded companies. The move triggered controversies due to the objection of foreign shareholders Yahoo! Inc. and Softbank Corp.

Ant Financial is currently 76.4% owned by Alibaba’s management and employees. Other shareholders of the company include China sovereign-wealth fund China Investment Corp. and the country’s national social security fund.

Alibaba on Thursday also reported one of its best quarterly results with 56% year-on-year revenue growth. Revenues totaled $12.76 billion in the quarter to the end of December, with a net income of $3.59 billion, Alibaba said.

“Our core business generated significant free cash flow of $7.1 billion during the quarter, enabling us to invest in New Retail, cloud computing, digital entertainment and globalization,” said Maggie Wu, chief financial officer of Alibaba. Alibaba Group founder and chairman Jack Ma coined the term New Retail in 2016 for a strategy that has been widely adopted by retailers and internet firms to use technology to transform the traditional retail sector.

Corrects earlier story to reflect that Ant previously paid fees to Alibaba that equaled 37.5% of Ant's own pre-tax profit.