By Li Zengxin and Yang Ge 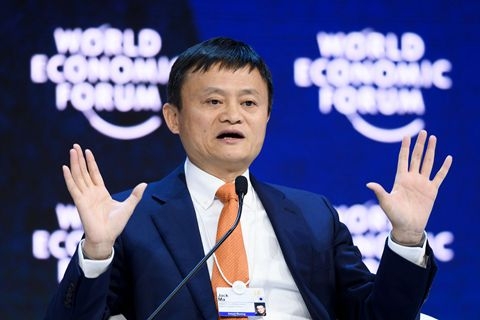 “It’s easy to (start) a trade war, hard to stop it,” Jack Ma, founder of Alibaba and one of China's richest men, said in Davos, Switzerland. Photo: Visual China

(Davos, Switzerland) – Alibaba founder and e-commerce mogul Jack Ma on Wednesday sung the praises of free trade and warned against protectionism, just weeks after two of his companies suffered setbacks at the hands of a U.S. government taking an increasingly hard line on China.

“When trade stops, war begins,” Ma said, speaking on an e-commerce-themed panel at the World Economic Forum, one of the world’s leading annual meetings for discussion on economic issues each year in Davos, Switzerland. “It’s easy to (start) a trade war, hard to stop it.”

Ma is one of China’s richest men and founder of e-commerce giant Alibaba Group Holding Ltd. and its Ant Financial affiliate. Observers have said recent setbacks suffered by the pair could signal an increasingly aggressive and protectionist administration under U.S. President Donald Trump.

Alibaba suffered a largely symbolic setback earlier this month when its name appeared on an annual U.S. blacklist of marketplaces with high levels of trafficking in fake goods. Alibaba countered that it had taken aggressive steps to tackle the problem, and said it had become a scapegoat under a U.S. protectionist agenda.

Weeks earlier, Ant Financial suffered a bigger disappointment when it scrapped its $1.2 billion plan to buy U.S. money transfer specialist MoneyGram International. Ant said it made the decision after repeated failure to satisfy the U.S. regulatory agency that clears all such deals for national security concerns.

While Ma used his Davos appearance to caution against trade wars, he also took the opportunity to sing the praises of globalism. A future world without borders would make the “made in China” label obsolete, replaced by a more global “made on the internet,” he said.

“Global is great,” he said.