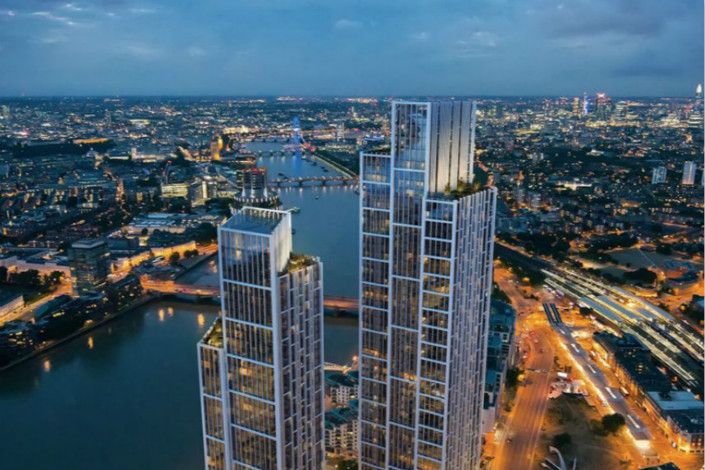 One Nine Elms overlooks the Thames River in London. Wanda’s hotel arm has sold its majority stake in the property in a deal worth $250 million. Photo: Wanda Group

Real estate and entertainment conglomerate Wanda Group said it will sell a majority stake in a prominent London property for more than $250 million, as it seeks to reduce a big debt burden built on an aggressive expansion at home and abroad.

The property sold was One Nine Elms, one of Wanda’s first overseas real estate assets, based on the address provided in an announcement to the Hong Kong stock exchange by Wanda’s hotel arm, Wanda Hotel Development Co. Ltd. In addition to paying 35.6 million pounds ($49 million) for 60% of the project, the unnamed buyer also agreed to repay a 159.5 million pound loan attached to the property, putting the deal’s total value at about 195 million pounds.

Wanda will retain 40% of the property after the deal. One Nine Elms is in southwestern London. It consists of two high-rise apartment buildings, retail space and the first Wanda Vista Hotel outside of China. Last August, Wanda scrapped its plans to purchase another plot of land in London for more than $600 million.

After that deal was done, Wanda Chairman Wang Jianlin told Caixin he wished to repay most of his company’s bank loans by the end of 2017, and that proceeds from the deal would be used for that purpose. His move came after China’s banking regulator in June criticized Wanda for a spending spree that saw it buy billions of dollars in overseas assets and accumulate large debts on a range of other major projects in China.