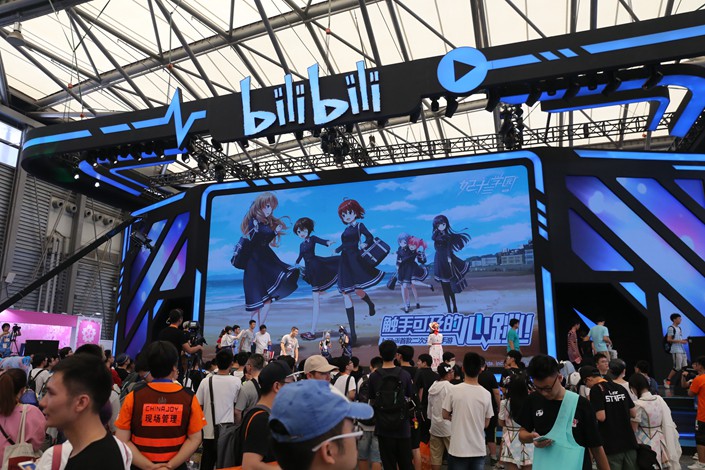 Visitors flock to the booth of popular video site Bilibili at an event in Shanghai in July 2017. Photo: IC

Alibaba Group Holding Ltd. has bought a 7.8% stake in Tencent-backed video and animation site Bilibili Inc., with the goal of using the platform to encourage people to buy things from its e-commerce platforms.

Alibaba announced on Thursday that its Taobao e-commerce unit had acquired 24 million shares of the Shanghai-based streaming site.

Caixin learned Alibaba last year bought shares from some long-term Bilibili shareholders and then boosted its stake this month with shares purchased on the secondary market. Both of the transactions were closed by Feb. 4. The other details of the transactions have not been disclosed.

The step follows an agreement announced by the two sides in December, in which Alibaba and Bilibili would collaborate in “content-driven e-commerce and commercialization of Bilibili’s intellectual property assets.”

An industry analyst told Caixin that the video site can encourage its users to consume more products, a commercial opportunity for which “Alibaba is naturally the biggest channel.”

Bilibili Chairman and CEO Chen Rui said in December that the company looks forward “to working with Taobao to fulfill the tremendous entertainment and consumption needs of the young generations in China.”

Founded in 2009, Bilibili is a leading entertainment video site that focuses on anime, comics and games. The site had 3.5 million monthly active users on average in the three months ending in September, up 200% from the same period the year, with growth mostly driven by the popularity of its livestreaming content, according to its latest earning report.

The revenue of its gaming-related business hit 744 million yuan ($109.8 million), accounting for 70% of the total in the third quarter. The Nasdaq-listed company was hit by headwinds from a 10-month freeze in approvals for new game releases — its loss widened over 15 times to 246.1 million yuan in the third quarter last year, as it continued to spend on game and comic offerings.