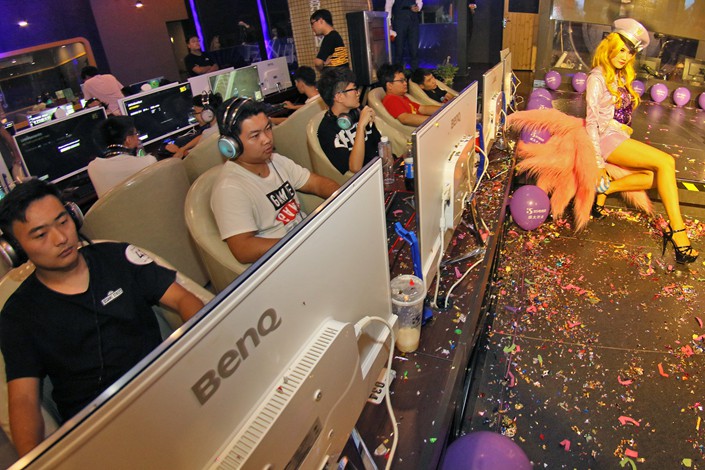 Gamers stay focused on their screens at an esports venue in East China’s Shandong province in September 2017. Photo: VCG

China has resumed approving new online game titles for publication, a government official said on Friday, ending a 10-month freeze that has taken a toll on gaming companies as Beijing sets up a new regulatory framework.

Word of the development sparked a rally for Chinese gaming stocks, which have struggled during the freeze due to inability to release new titles. Domestic game leader Tencent Holdings Ltd. led that charge, posting a 4.5% rise on Friday in Hong Kong.

An initial group of titles has been approved and are awaiting receipt of official publication numbers, Feng Shixin, a deputy head in the publishing office of the Communist Party’s Publicity Department said during an industry event on Friday morning. But he also called on the industry to be patient due to a big backlog of applications, and said digesting that backlog would take some time.

A Tencent spokesperson told Caixin the development was encouraging, and would assist in the industry’s improvement.

China’s gaming industry is the world’s largest with 620 million players, almost double the U.S. population. But this year Beijing has rolled out one of the harshest policy changes in recent memory, leaving many smaller players on the brink of bankruptcy.

Authorities stopped approving licenses for new game releases beginning in March, following a major reorganization of government departments. The regulator further stepped up restrictions by announcing in September that it would cap the total number of games in operation, and explore a mechanism that has an age-reminder system and is able to restrict the amount of time that minors spend on games.

Despite Friday’s rally, Tencent’s stock has still lost about a third of its value since March, partly over concerns about the freeze. The company reported its first profit decline in more than a decade during the three months to June, and in this year’s third quarter saw its gaming revenue drop 4% to 25.8 billion yuan ($3.7 billion).

Other shares that rallied on the news included China-listed Perfect World Co. Ltd. and Yoozoo Games Co. Ltd., which rose by 6.7% and 10%, respectively. The recently-listed iDreamSky Technology Holdings Ltd., which made its Hong Kong IPO during the freeze, also rallied 8.3%. NetEase Inc., the country’s No. 2 game operator, was up 4.8% during Friday’s premarket trade in New York.